Chalfont St Peter is a village and civil parish in Chiltern district in south-east Buckinghamshire, England. It is in a group of villages called The Chalfonts which also includes Chalfont St Giles and Little Chalfont. The villages lie between High Wycombe and Rickmansworth. Today, Chalfont St Peter is one of the largest villages in the United Kingdom partly due to the proximity to Gerrards Cross railway station which lies between London Marylebone and Birmingham Snow Hill on the Chiltern Main Line. John Laurie the Scottish actor, best known for his role as Private James Frazer, in the BBC sitcom Dad's Army lived in the village. 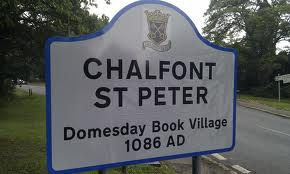 Chalfont St Peter F.C. are a football club based in Chalfont St Peter, near High Wycombe, Buckinghamshire. They were established in 1926. In 1988, they won the Isthmian League Second Division South. The Saints’ home at the Playing Fields was, until their transfer, a quintessential Isthmian League venue: tucked away in a Home Counties town, surrounded by greenery ... and unchanged to the extent that visiting it is a bit like stepping out of a time machine. The club has played there since 1952, and the stand was built by volunteers four years later. It has been re-roofed and re-cladded since then, but its numbered wooden seats are still providing good service. Unfortunately the large clubhouse that extends along half of the near touchline (built in 1985) obscures the view of a large part of the pitch. If that wasn’t bad enough, there are also a few roof supports and a floodlight pylon to contend with! A small lean-to added on to the clubhouse provides additional shelter. There are a few token steps of terracing set into the shallow grass bank behind the near goal, and also at the opposite end; whilst the two dugouts have alternate wooden seats in the club colours - a nice touch. 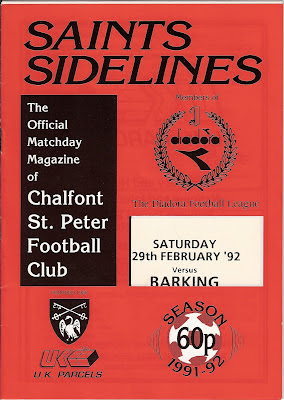