Southwick is a small town and civil parish in the Adur District of West Sussex, England located five miles west of Brighton and a suburb of the East Sussex resort City of Brighton & Hove. Southwick was recorded in the Doomsday book by its Saxon name, Esmerewick, meaning East pool hamlet. The village was first recorded as Suthewicke in 1309. The town grew as the coast became a popular holiday destination, many of the properties being tourist accommodation. The railway arrived in the town on 12 May 1840, being the original terminus. The town is loosely divided into three sections: south of Brighton Road is the harbour with its associated industries and businesses; north of Brighton Road up to Old Shoreham Road is mainly residential properties dating from the middle of the nineteenth century to the 1950s; and the area between Old Shoreham Road and the South Downs being the most recent to be developed, also largely residential.

Founded in 1882, Southwick FC became founding members of the West Sussex Football League in 1896. They became the first winners of the league, and successfully defended the title the following season. In 1920 they joined the Sussex County League as one of its founder members. They went on to win the championship four times between 1923 and 1948, and finished runners-up on a further four occasions. In 1952 the club left the league for two seasons to compete in the Metropolitan & District League but, after finishing bottom in 1954, rejoined the County League. The following season saw Southwick relegated to Division Two. John Shepherd took over as player manager in 1964–65 and the club were promoted to Division One after finishing as runners-up (on goal average) to Sidley United. In 1968, Shepherd led the club to victory in the Sussex Senior Cup, beating Athenian League Horsham 5–3 in front of a crowd of 4,261 at the Goldstone Ground, and the following season they finished as Division One Champions. In the 1974–75 season, they reached the FA Cup first round for the first and only time in its history. Under Ray McCarthy in 1982–83 it was Division One runners-up and runners-up in the County Challenge Cup. In 1984 Southwick left the County League to join the Combined Counties League. The following year the Wickers were promoted to Division Two (South) of the Isthmian League after finishing as runners-up. At the end of the 1985–86 season, Southwick were promoted to Isthmian League Division One as champions, but were relegated back to Division Two in 1990–91.

This Pieman visited Old Barn Way by train. The journey from London Victoria involved changing to a connecting service at Hove. Fishergate Station is only a few minutes walk from the ground. In a festival of  goals, visitors Egham Town won the match 5-2. 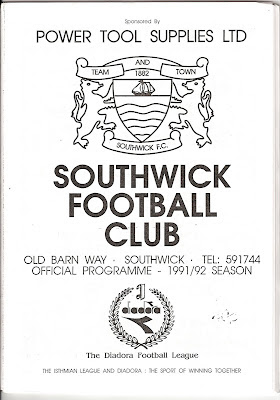