Harefield is a village in the London Borough of Hillingdon in the northwest of Greater London, England. It is situated on top of a hill, 17 miles (27 km) northwest of Charing Cross, near the Greater London boundary with Buckinghamshire to the west and Hertfordshire to the north. It is recorded in the Doomsday Book (1086) as Herefelle, comprising the Anglo-Saxon words ‘Here’ "[danish] army" and felle (later feld), "field". Before the Norman conquest of England, Harefield belonged to Countess Goda, the sister of Edward the Confessor. Following the Norman conquest, ownership of Harefield passed to Richard FitzGilbert, the son of Count Gilbert of Brionne. Harefield was eventually split into the main manor of Harefield, and the two smaller sub manors of Brackenbury and Moorhall. It had been owned by the Clares, descended from Richard FitzGerald, before passing to the Batchworths by 1235. In turn, the Swanlord family took possession in 1315. By 1446, the Newdigate family owned Harefield - they still owned some land in the 1920s. John Newdigate exchanged most of his land in 1585 with the Chief Justice of the Court of Common Pleas, Sir Edmund Anderson. During World War I, Harefield Park was used as an Australian military hospital. The bodies of the servicemen who died there were buried with full military honours within the graveyard of St. Mary's Church; this area, which also included the ground where the Harefield Place building stood, became a military cemetery. Brian Connolly (1945–1997), singer of glam rock band The Sweet grew up in Harefield and Hayes from the age of 12.

The club was formed in 1868 and in their early years played under several names including Harefield Victoria (circa 1891) and Breakspear Institute (circa 1903–1922), and played in the local Uxbridge Leagues. In 1934 the club merged with Harefield FC to become Harefield United, and played in the Uxbridge & District League. After World War II the club moved to the Great Western Combination in 1947, winning the league once in the 1950–51 season. In 1964 the club played in the Parthenon League, winning the league in their debut season. Two seasons later they joined the Middlesex League in 1966. During their five seasons in the Middlesex League the club went on to win the league title four times and the league cup twice. In the 1971–72 season the club then joined the Spartan League – Senior Section, staying there for four seasons, while also making their debut in the FA Vase in the 1974–75 season, before joining Division Two of the Athenian League for the start of the 1975–76 season. The club made their debut in the FA Cup in the 1979–80 season. After nine seasons in the Athenian League the club joined the Isthmian League Division Two North for two seasons before switching to Division Two South. The club then spent seven seasons in Division Two South, which was renamed to just Division Two in 1991. Harefield United play their games at Preston Park. 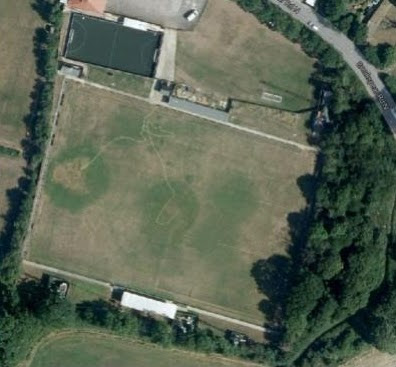 This Pieman travelled by train from London Marylebone to Denham from where it was still a reasonable hike to get to Preston Park. Harefield United defeated Newbury Town 2-0 in this Isthmian League Division Two encounter.