Hungerford is a market town and civil parish in Berkshire, England, centred 8.7 miles (14.0 km) west of Newbury. It has a railway station which is a minor stop on the London to Exeter (via Taunton) Line and part of the upper River Kennet flows through the town which has the confluence of its main river, the River Dun which is through the town deepest and widest as the Kennet and Avon Canal. Hungerford is a slight abbreviation and vowel shift from a Saxon name meaning 'Hanging Wood Ford'. The town’s symbol is the six-pointed star and crescent moon. The place does not occur in the Doomsday Book of 1086, but certainly existed by 1173. By 1241, it called itself a borough. The noble family of Walter Hungerford, 1st Baron Hungerford originated from the town, although after three generations the title passed to Mary, Baroness Hungerford who married Sir Edward (afterwards Lord) Hasting and the family seat moved to Heytesbury, Wiltshire. During the English Civil War, the Earl of Essex and his army spent the night here in June 1644. In October of the same year, the Earl of Manchester’s cavalry was also quartered in the town. Then, in the November, the King’s forces arrived in Hungerford on their way to Abingdon. During the Glorious Revolution of 1688, William of Orange was offered the Crown of England while staying at the Bear Inn in Hungerford. Hungerford has a bit of a gruesome past, as in the late 19th century; two policemen were shot by poachers in Eddington. Their memorial crosses still stand where they fell. In 1987 an unemployed local labourer, Michael Robert Ryan, armed with several weapons, shot and killed or fatally wounded 16 people around the town including his mother. He then killed himself in a local school after being surrounded by armed police. This event became known as the Hungerford massacre.

Hungerford Town FC was founded in 1886 initially playing friendlies as there was no local league or cup competitions available to join. Their first record of a fully competitive game was when the club in the 1901–02 season reached the final of the Newbury Cup, losing 2–0 to Newbury Town, but they won the competition three seasons later. The club joined the Hungerford League and then became founding members of the Newbury League in 1909. In their first season they won the Newbury Challenge Cup, four seasons later they won the league and retained the league title in the 1913–14 season. After the First World War the club reformed in 1919 and went on to win the Newbury League again that season and in the 1921–22 season. After the Second World War the club was playing in the Newbury & District League and also the Swindon & District League. At the start of the 1958–59 season the club joined the Hellenic Football League starting in the Premier Division. The club then spent seven seasons in the top division of the Hellenic League before being relegated to Division One at the end of the 1964–65 season. The club came back in style at the end of the 1970–71 season by winning Division One and the Hellenic League Cup. The next seven seasons saw the club remain in the Hellenic Premier Division, during this period the club made its debut in the FA Vase in the 1973–74 season, and the FA Cup a season later. At the end of the 1977–78 season, after coming 3rd in the Hellenic League and reaching the Semi-final of the FA Vase for the second time, the club got elected to the Isthmian League, under Manager Jim Kelman, who had joined the club in 1975. In the 1979–80 season, they reached the First Round Proper of the FA Cup. In the 1981–82 season Jim Kelman saw the club clinch the Berks and Bucks Senior Cup at their fourth final appearance, beating Wycombe Wanderers 1–0. After the Berks and Bucks success the club has remained in the Isthmian League in Division Two and play at Bulpit Lane. 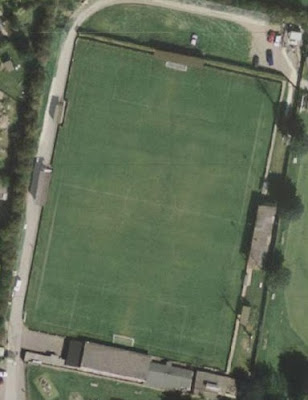 This Pieman visited Hungerford by train from London Paddington, changing services at Reading. The walk from the station to the ground taking around ten minutes. A very impressive display by West Midland Police saw them win this FA Vase 5th Round by three clear goals. 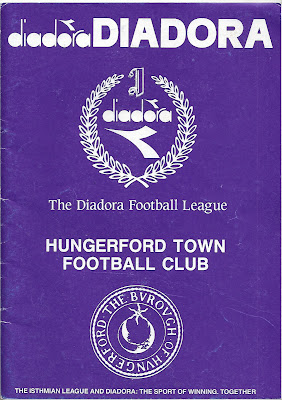