Northwood is an elevated residential settlement in the London Borough of Hillingdon adjoining Ruislip Woods National Nature Reserve (which contains the Ruislip Lido) and which shares a northern border with Hertfordshire. In 1086 at the Doomsday Book the Northwood-embracing parish of Ruislip had immense woodland, sufficient support for one parish of 1,500 pigs per year, and a park for wild beasts (parcus ferarum). Northwood was first recorded in 1435 as Northwode, formed from the Old English 'north' and 'wode', meaning 'the northern wood', in relation to Ruislip. By 1881, the population of Northwood had reached 257, with 62 houses recorded from 41 people in 1841. By 1891, Northwood had 115 houses, one shop and one public house. In 1901, there was a population of 2,500 in approximately 500 houses and Northwood Hills had 26 shops. In 1887, the Metropolitan Railway was extended from Harrow-on-the-Hill to Rickmansworth. Northwood station opened in August that year. Northwood and Pinner Cottage Hospital was built in 1926 as a memorial to the First World War, using donations from the Ruislip Cottagers' Allotments Charity. Northwood is home to Northwood Headquarters, based in the grounds of Eastbury Park. The Royal Air Force took over the site in 1939 for the use of RAF Coastal Command which made use of Eastbury house and also created a network of underground bunkers and operations blocks, at which time the house was used as the leading Officers' Mess, though was subsequently damaged by fire. The RAF vacated the site in 1969, and it is now the location of the British Armed Forces Permanent Joint Headquarters (PJHQ) for planning and controlling overseas military operations, together with the NATO Regional Command. Northwood was used for location filming of the Goods' and Leadbetters' houses and surrounding streets in the hugely popular BBC TV situation comedy series The Good Life during the 1970s, although the supposed location of the series was in fact the town of Surbiton in south west London.


A football club in the Northwood area was established in 1899, however Northwood as they are today were not believed to have been formed until 1926. Their early history is largely unknown and it is unclear what leagues they played in until 1931, when they joined the Harrow & Wembley League. They were champions of this league for six years in a row just prior to World War II and three more times after the war. This success did not last, however, and the 1950s and 1960s were mainly spent playing local junior-level football. In 1969 the Woods joined the Middlesex County Senior League. Northwood began life as Northwood Rovers and later United, but after The Second World War they dropped the suffix, to become what they are today – simply Northwood FC. In 1978, Northwood won the Middlesex League Championship and were able to step up to the Hellenic League Division One, which they won in their debut season. This led to promotion to the Premier Division, where they spent five, mostly mid-table, seasons. The club moved across the pyramid in 1984 to the London Spartan League. Northwood Park (also known as Chestnut Avenue) has a capacity of 3,075. The stadium was officially opened in 1978, as prior to this Northwood had played on local playing fields in the surrounding area. This Pieman visited Northwood for this evening fixture, travelling by Metropolitan Line train to Northwood station. Northwood Hills, the next station on the line, is as near to the ground. The home side won this local derby match 3-1. 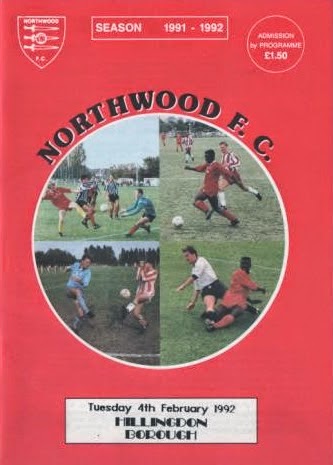