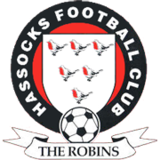 Hassocks is a large village and civil parish in the Mid Sussex district of West Sussex, located approximately 7 miles north of Brighton. Its name is believed to derive from the tufts of grass found in the surrounding fields. It is believed the area first became a centre of population around 20,000 years ago during the Stone Age. The people were mostly nomadic until approximately 5,000 years ago. Around this time, the first farmers settled on and around the South Downs, a mile to the south of the village. They travelled from the continent, bringing with them various types of farming livestock. Evidence of their existence has been found in the form of tools and dwellings around Stonepound Crossroads and in the Parklands area. The area now occupied by Hassocks was just a collection of small houses and a coaching house until the 19th century, when work started on the London to Brighton railway. The Parishes were Clayton and Keymer; it is believed that when the railway came in 1841 the Parish Councils were given the opportunity of naming the station. But they could not agree and eventually the directors of the London, Brighton & South Coast Railway gave up waiting and named the station Hassocks Gate themselves. In 1861 a collision between two trains killed 23 people and injured 176 others.

Hassocks FC were founded in 1902, spending the first 80 years competing in the Mid-Sussex Football League and the Brighton, Hove & District Football League, mainly at Adastra Park. Ambitions for senior football were realised for the 1981–82 season when the club became members of Division 2 of the Sussex County League, finishing in 12th in their first season. Consolidation followed with regular placings in the top half of the division until the end of the 1986–87 season, when a change in the County League rules regarding ground grading saw the club demoted to Division 3 and a return to intermediate football. 1991 saw a change in chairman and management with Jim Goodrum elected Chairman, Dave John coming in as General Manager and the introduction of a new management team of Nick Grenwood and Pete Liddell in charge of First Team affairs.

This Pieman visited Hassocks on a Good Friday morning for this Sussex County League match. Adastra Park is only a few minutes walking from Hassocks railway station. A close encounter saw the home side win by the only goal of the match. Visitors Sidlesham had former Portsmouth midfielder Joe Laidlaw in their side. 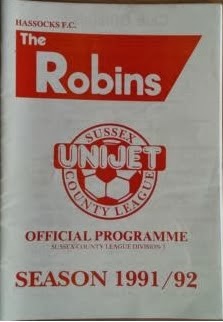