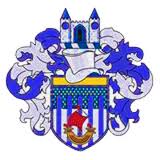 Tonbridge is a market town in the English county of Kent, located on the River Medway, approximately 4 miles north of Tunbridge Wells, 12 miles south west of Maidstone and 29 miles south east of London. The town was recorded in the Doomsday Book 1087 as Tonebrige, which may indicate a bridge belonging to the estate or manor (from the Old English tun), or alternatively a bridge belonging to Tunna, a common Anglo-Saxon man's name. Another theory suggests that the name is a contraction of "town of bridges", due to the large number of streams the High Street originally crossed. A castle was built here in the 11th century by Richard Fitz Gilbert, son of the murdered guardian of William the Conqueror in his infancy. Richard was responsible for governing England in William I's many absences. The town was besieged by William Rufus, soon after his accession to the throne, because the Earl had pledged allegiance to William's brother, Robert. It is thus hardly surprising that the arrow that killed William Rufus a few years later in the New Forest was fired by Walter Tirel who was born in town as well as the Earl's in-law. It was soon afterwards taken again, this time by King John only a few months after the signing of the Magna Carta. During the Civil War, the town was garrisoned by the Parliamentarian side who refortified the castle. Royalist sympathisers made several attempts to take the town but were repulsed. In 1740 an Act of Parliament was passed to make the River Medway navigable to Tonbridge by the Medway Navigation Company, allowing such materials as coal and lime to be transported to the town, and gunpowder, hops and timber to be carried downriver to Maidstone and the Thames. For a hundred years the Medway Navigation Company was highly profitable, paying out good dividends to its investors but after the arrival of the railway in 1842 the company went into a steep decline and all commercial traffic ceased in 1911 when the company collapsed. Some of the original warehouses and the wharves are still recognisable today, downstream of the town's main bridge. During the March 1880 parliamentary elections, Tonbridge was the scene of a riot. On the announcement of the results, several thousand people started to hurl stones and cobbles at each other in the High Street near the Rose and Crown Hotel. The county's Chief Constable Captain Ruskin, with over a hundred policemen, charged the crowds many times during the evening, only to end up as the target of the crowd, who started hurling stones and cobbles at them instead of each other. Many people, including twelve policemen, were seriously injured before the crowd finally dispersed at midnight. During World War II a Prisoner of War Camp was built at the junction of Tudeley Lane and Pembury Road on land belonging to Somerhill. It held German pilots who had been shot down, and captured Italian soldiers. After the war the camp was used as temporary housing for people made homeless by the Blitz. The site is now occupied by the Weald of Kent Girls' Grammar School.

Tonbridge Football Club was formed in October 1947 following the suggestion of local businessman and founder chairman Mr. Herbert Portch, and was one of four clubs to be elected to the Southern Football League for the 1948–49 season. The club took out a lease on the Angel Ground, formerly the home of Kent County Cricket Club and named after the nearby hotel, 'The Angel'. Hence Tonbridge FC became known as 'The Angels'. Throughout the 1950s the Angels would struggle to make any progress in the Southern League and a peak of 11th place was reached in 1949–50, the club's second season. The first trophy to be lifted came in 1951/52 with the Angels winning the Kent Senior Shield. Tonbridge would go on to win this trophy a further four times, in 1956, 1958, 1959 and 1964. The notable success of the 1960s was the achievement of reaching the First Round Proper for a fourth time, this time being knocked out 1–0 by Dagenham. The club also won the Kent Senior Cup for the first time in 1964–65. In 1972–73 the Angels won promotion to the Premier Division by finishing as runners-up to Maidstone United. In the same season the First Round Proper of the FA Cup was reached once. A crowd of 7,770 saw Charlton win 5–0. Tonbridge won the Kent Senior Cup in 1974–75 while managed by former World Cup winner George Cohen. After struggling to stay in the Premier Division, the club suffered financial troubles and went into voluntary liquidation in 1976. Tonbridge Angels FC was then formed and allowed to complete the fixture list on the understanding that relegation would result at the end of the 1975–76 season, wherever the club finished. Another major problem loomed soon after. The club's landlords, the local council, wanted the Angel Ground for development. A battle lasting up to three years that went as far as the High Courts ensued before the club was eventually offered a new ground at Longmead, its present home. The appropriately named Micky Angel scored the last ever goal at the old Angel Ground in 1980. 1988–89 proved to be a disaster for the club. Former Tottenham Hotspur man Terry Naylor took charge and lasted for just seven games, in that time only managing to earn a single drawn match. With the Angels at the bottom of the league Tommy Sampson came in to try to steady the ship but the damage was already done. The Angels bade farewell to the Southern League after 40 years, relegation to the Kent League being the club’s “reward” after ending the season in next to bottom spot. The Angels regrouped for the 1989–90 season with former player and manager Tony Burns returning to manage the club for a second time. Tonbridge finished in a worthy third place, not enough for a quick return to Southern League football, but silverware was forthcoming in the form of the Kent League Cup. Another former manager returned for the 1990–91 season, Phil Emblen, and he sparked a revival in the club's fortunes. Emblen patiently built a winning team and after two fourth-placed finishes, money-spinning Cup runs and another Kent League Cup win, the title finally arrived at Longmead in the 1992–93 season. And so, after a few seasons away, Tonbridge returned to the league which they had graced for so many years. 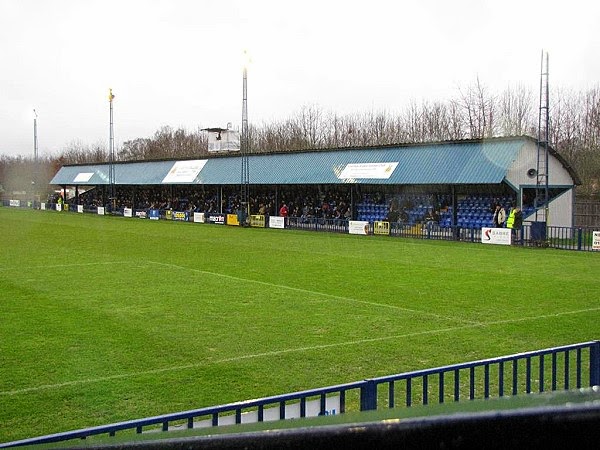 This Pieman travelled by train to Tonbridge. The walk from the station to the Longmead Stadium taking around twenty minutes. Tottenham Hotspur won this friendly match 3-0. 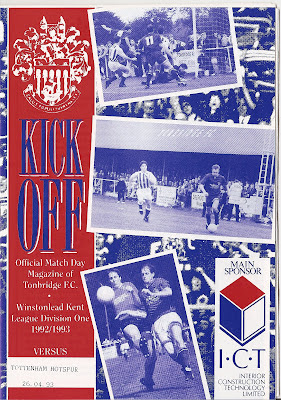