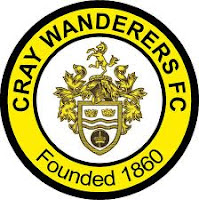 St Mary Cray is a town on the River Cray in South East London, and is part of the London Borough of Bromley. It was historically a part of Kent, and still lies near the border of Greater London with the county. It was originally called South Cray, identifying it as the southernmost settlement on the river. Like nearby St Paul's Cray, it has been somewhat overshadowed by the growth of Orpington, which now provides local communities with their main shopping and business facilities. Today it is mostly suburban housing, to a large amount of working class and ex traveller people. Originally the main feature of the town was its small parade of shops which was once longer than Orpington High Street. 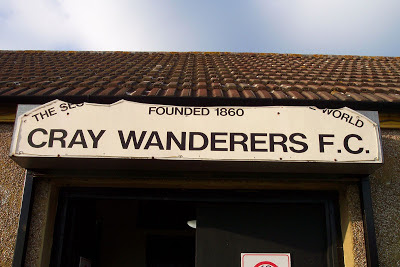 Cray Wanderers F.C. was formed in 1860 by workers building a railway from London to the Kent coast.   It is one of the oldest football clubs in the world. In 1894 they joined the first incarnation of the Kent League, where they were champions in 1901–02. At this time the club was operating on a full-time professional basis and also acted as a feeder club to Woolwich Arsenal. After World War I the team switched to the London League but returned to the Kent League in 1934. Cray started playing football at Star Lane, now a cemetery. After playing at numerous other grounds, Cray played at Grassmeade from 1954 to 1973, after which they moved to Oxford Road.

This Pieman ventured to Sidcup after work for this end of season match. The Oxford Road ground is situated behind landlords Sidcup Conservative Club. Cray Wanderers were rampant on the night beating Ramsgate 7-2 in a very entertaining match. 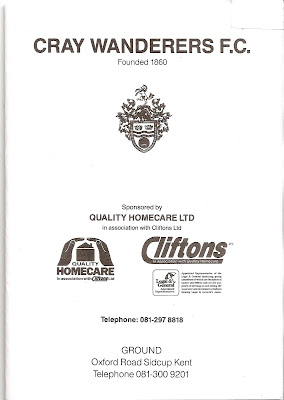