Dover is a town and major ferry port in the home county of Kent, in South East England. It faces France across the narrowest part of the English Channel, and lies south-east of Canterbury; east of Kent's administrative capital Maidstone; and north-east along the coastline from Dungeness and Hastings. The town is the administrative centre of the Dover District and home of the Dover Calais ferry through the Port of Dover. The surrounding chalk cliffs have become known as the White Cliffs of Dover, and the narrow sea passage nearby – the Strait of Dover. Its strategic position has been evident throughout its history: archaeological finds have revealed that the area has always been a focus for peoples entering and leaving Britain. The name of the town derives from the name of the river that flows through it, the River Dour. The town has been inhabited since the Stone Age and Dover is one of only a few places in Britain – London and Cornwall being other examples – to have a corresponding name in the French language, Douvres. Dover’s history, because of its proximity to France, has always been of great strategic importance to Britain. Archaeological finds have shown that there were Stone Age people in the area; and that by the Bronze Age the maritime influence was already strong. Dover figured largely in the Doomsday Book as an important borough. It also served as a bastion against various attackers: notably the French during the Napoleonic Wars; and against Germany during World War II.


Dover Athletic FC was formed in 1983 after the town's previous club, Dover, folded due to its debts. The new club took Dover's place in the Southern League Southern Division, with former Dover player Alan Jones as manager and a team consisting mainly of reserve players from the old club. Dover Athletic's traditional colours are white and black, which were also the colours worn by the earlier Dover club. Dover Athletic's home ground since the club's foundation has been the Crabble Athletic Ground, which was also the home of the former Dover club. The word Crabble, which is also found in the name of a local corn mill, may derive from the Old English crabba hol, meaning a hole in which crabs are found. The stadium, commonly known simply as "Crabble" or, imprecisely, as "The Crabble", forms part of a larger council-owned complex, and the earlier Dover club originally shared the lower pitch with a rugby club, but moved to the upper pitch in the 1950s, adding a grandstand in 1951, followed soon after by terracing and floodlights. 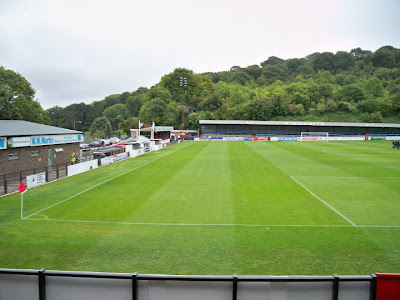 This Pieman visited Dover on a warm August Saturday afternoon to watch a pre-season friendly against a strong Tottenham Hotspur side. I travelled by train from London Victoria to Dover Priory and returning via a fine local village pub and Kearsney station. 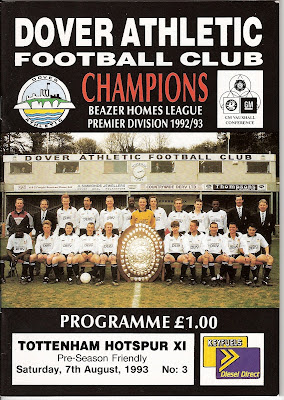