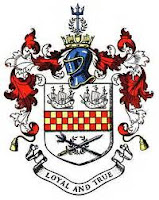 Chatham is one of the Medway towns located within the Medway unitary authority, in North Kent, in South East England. The name Chatham was first recorded as Cetham in 880. The Doomsday Book records the place as Ceteham. Among finds have been the remains of a Roman cemetery. After the Norman invasion the manor of Chatham, originally Saxon, was given by William the Conqueror to Earl Godwinson. It long remained a small village on the banks of the river, but by the 16th century warships were being moored at Jillingham water {Gillingham}, because of its strategic sheltered location between London and the Continent. It was established as a Royal Dockyard by Queen Elizabeth I in 1568 and most of the dockyard actually lies within Gillingham. Initially a refitting base, it became a shipbuilding yard; from then until the late 19th century, further expansion of the yard took place. In its time, many thousands of men were employed at the dockyard, and many hundreds of vessels were launched there, including HMS Victory which was built there in the 1760s. After World War I many submarines were also built in Chatham Dockyard. In addition to the dockyard itself, defensive fortifications were built to protect it from attack. Upnor Castle had been built in 1567, but had proved ineffectual; the Dutch Raid on the Medway in 1667 showed that more was required. The fortifications, which became more elaborate as the threat of invasion grew, were begun in 1756 as a complex across the neck of the peninsula formed by the bend in the River Medway, and included Fort Amherst. The importance of Chatham dockyard gradually declined as Britain's naval resources were reduced or moved to other locations, and eventually, in 1984, it was closed completely. The dockyard buildings were preserved as the historic site Chatham Historic Dockyard (operated by Chatham Historic Dockyard Trust); now under consideration as a World Heritage Site the site is being used for other purposes.

Chatham Town F.C. was formed in 1882 as Chatham United, when Rochester Invicta merged with the Royal Engineers Band football team. Chatham played their home games at the Army owned pitches called "The Lines", where they were to remain until 1889 when they moved to the Maidstone Road Ground. This cup run was also instrumental in the Football Associations ruling that all future matches in the competition must be played on fully enclosed grounds, where the visiting club would receive a share of the gate money. So the club moved to the Maidstone Road site which was owned by a George Winch, who allowed the club to enclose the ground and build a pavilion with seats in front for £125. In 1894 Chatham became founder members of both the Southern League and the original Kent League, winning the Kent League in its inaugural season. For the first two seasons the club competed in both leagues, but left the Kent league to concentrate on the Southern league in 1896. In the 1900/01 season, owing to financial difficulties, Chatham resigned from the Southern League. They played as Chatham Amateurs in 1901 for a season and rejoined the Kent league, where two seasons later in 1903/04, they won the Kent league and repeated the same feat the following season, as well as winning the Kent Senior Cup. After the War Chatham won the Kent Amateur League Premier Division in 1946–47, which was to be their last honour under that name. On 7 January 1947 they merged with Shorts F.C., with the amalgamated club taking the name Chatham Town at the request of the local Council. They then joined Division One of the Kent League for the 1947–48 season and stayed there until 1959, when the Kent league disbanded. For the 1959–60 season they joined they became founding members of the Aetolian League. The following year they captured the League Championship and the Aetolian League Cup Final. In 1964–65 the Aetolian League merged with the London League the club moved to the Metropolitan League. Four Seasons later they returned to the Kent League when it was reformed in 1968. They remained in the Kent league until 1983, when they joined the Southern League. During the 15-year period in the Kent league they won League on four occasions and completed the League and Cup double in both 1971–72 and 1977–78. It was also a period where the club changed its name in 1974 for 5 years to Medway F.C., again at the request of the local Council, changing it back to Chatham Town in 1979. The club stayed in the Southern League until 1988, when having failed to gain re-election they were relegated back to the Kent League – once again in severe financial difficulties, with crowds often in double figures against poorly supported clubs, as opposed to the much healthier attendances they had enjoyed in the Kent League against more local opposition.

This Pieman travelled to Maidstone Road by train for this evening fixture. I was able to walk to the ground in about 20 minutes from the rail station. A closely contested match was won by the home side by two goals to nil. 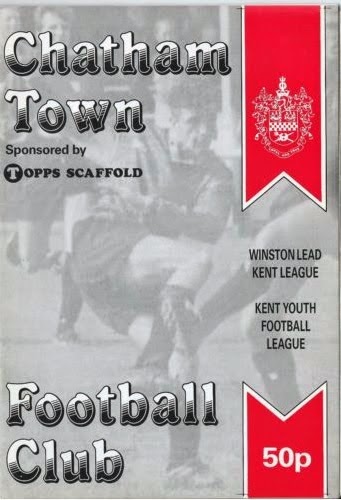