Horley is a town in Surrey on the border of Surrey and West Sussex, England, south of the twin towns of Reigate and Redhill, and neighbouring Gatwick Airport and in turn Crawley. During Saxon times, the Manor of Horley came under the control of the Benedictine Abbey of St Peter at Chertsey. In the Doomsday Book of 1086, the Manor was within the hundred known as Cherchefelle which in 1199 became known as Reigate. The Manor passed to Henry VIII on the dissolution of the monasteries in 1539 and changed hands several times during the next sixty years. About 1 mile (1.6 km) to the east is the overgrown but well-preserved site of Thunderfield Castle, a twelfth-century ring and bailey castle. In 1602 the Manor of Horley became the property of Christ's Hospital in London and the original map of the manor shows that Horley consisted of three hamlets around a huge open common. One was around the area occupied by St Bartholomew's Church and the Six Bells public house; another by the River Mole and the third in Horley Row where some of Horley's oldest buildings can still be seen. The Common was enclosed in 1816, new roads were laid and the intervening land was sold. In 1809 and later in 1816, two turnpikes were introduced to allow the operation of regular coach services from London to Brighton. The railway was laid in 1841 and a station was built in the town. From that position, and from that date, Horley grew at a slow rate until 1950. Since then its population has doubled as it became a dormitory town for London commuters. The Local Government Act of 1972 changed the boundary of Surrey and West Sussex and placed Horley, Gatwick and Charlwood in West Sussex. The removal of Gatwick Airport and the surrounding area from Surrey into West Sussex met some fierce local opposition with the result that the parishes of Horley and Charlwood were subsequently returned to Surrey in the eponymous Charlwood and Horley Act 1974, leaving the airport to stay in West Sussex. 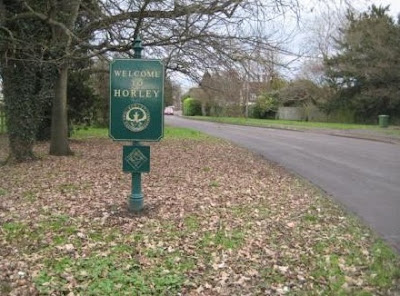 The club was originally known as Horley F.C. and was first affiliated to Surrey F.A. in 1896. In 1908 the club merged with Gatwick Rovers but did not change its name until 1975 when it became Horley Town FC. Following the Second World War, Horley was faced with the prospect of losing its home at “The Kings Head” ground and set about finding a new home. A local landowner by the name of Major A.L.N. Jennings became the Club’s benefactor (and President) following his generous decision to give the club 10.7 acres of land in Smallfield Road. The land was held in trust for the people of Horley from 1947, in memory of those that died in the defence of their country, and the ground was appropriately named “The Defence”. In 1984 the club joined the Combined Counties Football League.

This Pieman travelled by train from London Victoria to Horley for this midweek Combined Counties League fixture. The walk from Horley station taking a little around fifteen minutes. On a cold evening Horley and visitors Farleigh Rovers shared the spoils with a 1-1 draw.