Arlesey is a small industrial town and civil parish in the district of Central Bedfordshire in Bedfordshire. It is located near the border with Hertfordshire, about three miles north-west of Letchworth Garden City, four miles north of Hitchin and six miles south of Biggleswade. Arlesey railway station provides train services to London, Peterborough and Stevenage. The station opened in 1988 under Network South East. The old station was called Arlesey & Henlow and was shut to passengers in the 1960's. Major employers in Arlesey used to be the Fairfield Hospital (now re-developed as Fairfield Park) and the former brickworks (producers of the Arlesey Whites bricks seen in many local buildings). Some of the clay pits used by the brickworks are now lakes and there are also two disused Portland Cement Company chalk pits, one of which is the Blue Lagoon, which hosts fishing and sailing clubs. 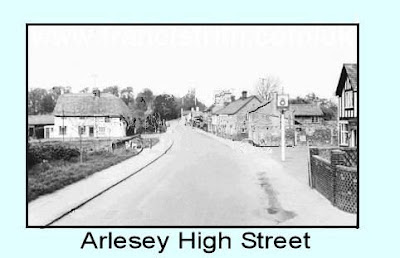 I had often caught glimpses of Lamb Meadow from the train as it sped through Arlesey on the main East Coast line from Kings Cross. What was not so apparent was the distance between the ground and the railway station at the northern edge of town. Still we had time to spare and it was a pleasant enough walk.

The match was a thrilling end to end cup tie which provided excellent entertainment for the bumper crowd and those anglers fishing nearby. One such angler was a colleague who told me that it was a bit noisier than usual! 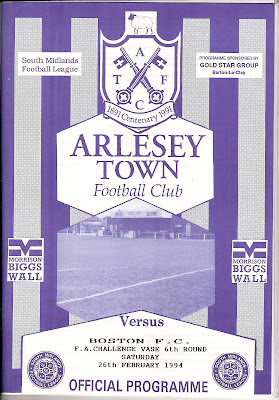 The Pieman's subsequent visit to Hitchin Road (April 2004)
Posted by Pieman at 11:59 pm