Godalming is a historic market town, civil parish and administrative centre of the Borough of Waverley in Surrey, south-southwest of Guildford, traversing the banks of the River Wey in a hilly, heavily wooded part of the London commuter belt and Green Belt. The town has existed since Saxon times and probably earlier. It is mentioned in the will of King Alfred the Great, and the name itself has Saxon origins, 'Godhelms Ingus' roughly translated as “the family of Godhelm”, and probably referring to one of the first lords of the manor. Godalming Parish Church has an early Saxon chancel and a Norman tower. The town grew in size because its location is roughly half-way between Portsmouth and London, which encouraged traders to set up stalls and inns for travellers to buy from and rest in. Godalming came to world attention in September 1881, when it became the first town in the world to have installed a public electricity supply, which made electricity available to consumers. It was Calder & Barnet who installed a Siemens AC Alternator and dynamo which were powered by a waterwheel, located at Westbrook Mill, on the river Wey. There were a number of supply cables that fed seven arc lights and 34 Swan incandescent lights, some of which were laid in the gutters. Floods in late 1881 caused problems and in the end Calder & Barnet withdrew from the contract. It was taken over by Siemens. Under Siemens the supply system grew and a number of technical problems were solved. But later on in 1884 the whole town reverted to gas lighting as Siemens failed to tender for a contract to light the town. This was due to a survey they undertook in the town that failed to provide adequate support to make the business viable. Siemens had also lost money on the scheme in the early years, but was prepared to stay on in order to gain experience. Electricity returned to the town in 1904. 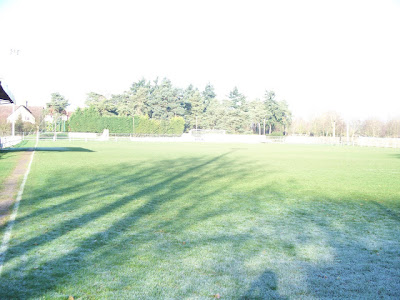 Godalming & Guildford FC can trace its origins to Godalming United FC, a club formed in 1950 by former pupils of Godalming Grammar School. In 1970 Surrey Senior League side Farncombe folded. Godalming took over their debts and their Meadrow ground, changing their name to Godalming & Farncombe FC and the name of the ground to Weycourt. The club was accepted into the Combined Counties League in 1979, and in 1980 changed its name again, this time to Godalming Town FC. The team were league champions in 1983–84 but subsequently slipped down the league until by the early 1990s they were regularly battling against relegation. In 1992 the Guildford Football Appeal donated money towards the cost of adding floodlights to the ground, and in return the name of the club was changed once more, to Godalming & Guildford FC.

This Pieman visited Weycourt on a midweek evening after work. Travelling from London Waterloo to Farncombe it is only short walk from the station to the ground. The home side clinched the points with a solitary strike against visitors Horley Town. 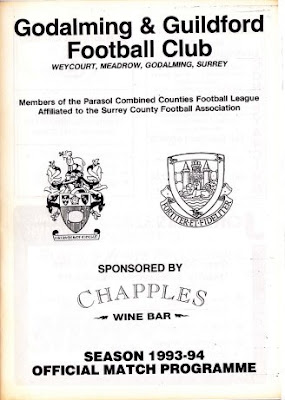