Maidstone is the county town of Kent, England, 32 miles south-east of London. The River Len joins the Medway at Maidstone. Though a short river, it provided the water to drive numerous watermills. The Loose Stream, which rises at Langley and joins at Tovil, once powered over 30 mills. Mill ponds on these rivers are a prominent feature of the landscape. Because of this Maidstone had an industrial base, and became a nodal point for communications, both along the ridge and beside the river, and on the river itself. One of the first roads in Kent to be turnpiked was from Rochester to Maidstone, in 1728. The A20 runs through the town and the M20 motorway runs to the north. Opened in 1960 as the Maidstone Bypass A20(M), this was the first motorway south of London. Maidstone is a hub for major roads: the M20 motorway, the A229, A249, A20 and A26. The M2 motorway is a short distance to the north and the A21 also runs close to the town. Between 1928 and 1967, Maidstone had a small trolleybus network.

Kent Police FC play at Sutton Road (Kent Police HQ). They joined the Kent League in the 1969-70 season, becoming league runner-up at the first attempt. In the 1971-72 season they were deducted four points, for failure to fulfil two fixtures. From the mid 80’s, player availability would likely have been a big issue for the team, as it would have been at this time, that the police force revoked officers “time off for sport”. In 1984-85 Kent Police were also deducted two goals. The future of the team is uncertain, because Kent Police are selling off considerable land for the development of housing and supermarkets. In addition to this, the Kent League also require floodlights to be installed at all grounds, which Sutton Road does not have at the moment. 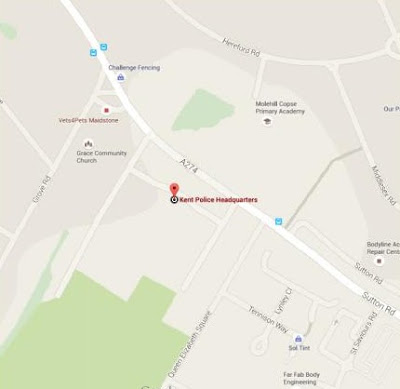 This Pieman travelled from London to Maidstone by train. The walk from the station to Police HQ took around twenty five minutes. Visitors Ramsgate were convincing 5-1 winners over their hosts in this match. 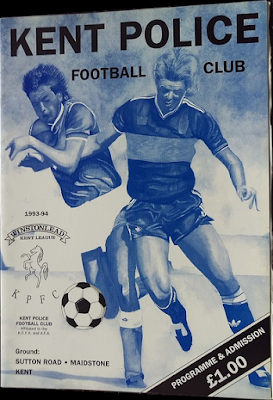