Hall Green is an area in south Birmingham, England. On School Road is the Church of the Ascension, formerly the Job Marston Chapel, which was built in 1704 and is believed to have been designed by Sir William Wilson. The chancel and transepts were added in 1860. The brick building consists of an exterior with a stone entablature and balustrade supported by Doric pilasters and the window architraves are of moulded stone. At the west end is a tower with an octagonal upper storey with a copper cupola. The interior of the nave is covered by a coved plaster ceiling. It is the earliest classical church to survive within the city boundary. Hall Green has been a home to comedian Tony Hancock, who lived there until the age of three (the house contains a plaque commemorating this), racing commentator Murray Walker, Nigel Mansell, who though born in Upton-upon-Severn spent most of his childhood and early adult years in the area and most famously J. R. R. Tolkien, who lived near Sarehole Mill, Birmingham's only working water mill.

Moor Green FC was formed in 1901 by players from the Moseley Ashfield Cricket Club but did not play competitive football until 1922 when they joined the Birmingham AFA. In 1935–36 they were league champions and joined the Central Amateur League and were league champions in each of the three seasons in which they played in the league. After World War II the Moors joined the Birmingham Combination, followed by a switch to the Birmingham & District League (soon to be renamed the West Midlands (Regional) League) in 1954. They struggled in this league, however, and in 1965 stepped down to the Worcestershire Combination (soon to be renamed the Midland Football Combination), which was at the time considered a weaker league. The club finished as league runners-up on four occasions and won the championship in 1980–81. This success was rewarded with a step up to the Southern League in 1983. The club have played at The Moorlands (a 3250 capacity stadium with 250 seats) since 1930.

This pieman travelled from London Marylebone to Hall Green via Birmingham Moor Street. From Hall Green station it was just over a 5 minute walk to The Moorlands. The home side edged a closely contested Southern League, Midland Division match 1-0 over Racing Club Warwick. 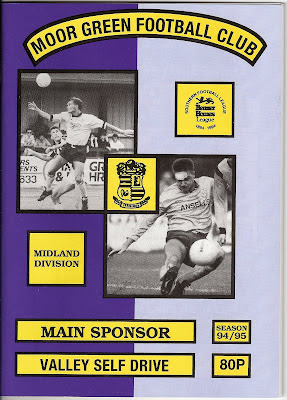