Bedford was a market town for the surrounding agricultural region from the early Middle Ages. In 1660 John Bunyan was imprisoned for 12 years in Bedford Gaol. It was here that he wrote The Pilgrim's Progress. Bedford is home to one of the largest concentration of Italian immigrants in the UK. According to a 2001 census, 30% of the population of Bedford's population are of at least partial Italian descent. This is mainly as a result of labour recruitment in the early 1950s by the London Brick Company in the southern Italian regions of Puglia, Campania, Calabria, Molise, Abruzzo and Sicily. Bedford's Little Italy feel is enhanced by a wide variety of Italian bars, restaurants and social clubs throughout the town. Bedford has, since 1954, had its own Italian vice-consulate. 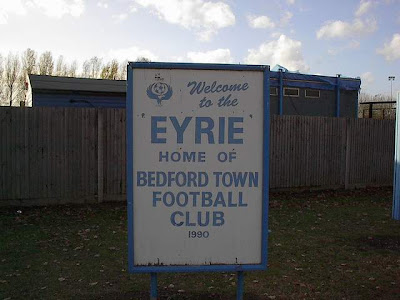 A midweek post work jaunt via Thameslink enabled us to reach Bedford with plenty of time to spare before this match. The town centre is unremarkable but we were able to grab a bite to eat at an Italian restaurant. Our research had established that Bedford Town FC were running a special bus from the town centre to all matches at their new stadium. The 'Eagles Special' was half full as it chugged the 20 minute journey out to Cardington, the location of The Eyrie. The landscape in the vicinity is dominated by the enormous aircraft hangers at Cardington. 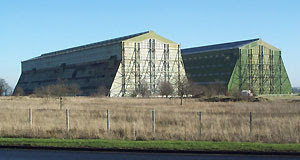 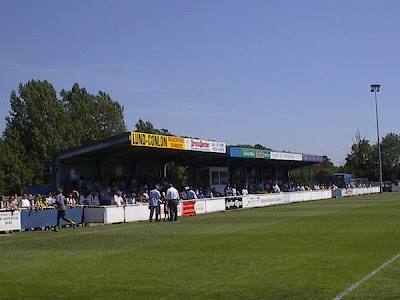 Bedford Town walloped visitors Harlow Town 5-0 in a completely one sided encounter. The Eagles Special was waiting for us as we exited the ground and within 5 minutes of the final whistle, we were on our way back to the railway station. 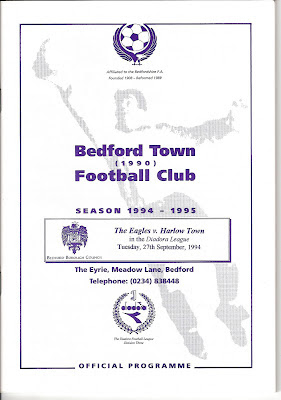