East Grinstead is a town and civil parish in the north-eastern corner of Mid Sussex; West Sussex in England near the East Sussex, Surrey, and Kent borders. It lies 27 miles south of London, 21 miles north northeast of Brighton, and 38 miles east northeast of the county town of Chichester. Nearby towns include Crawley to the west, Tunbridge Wells to the east and Redhill and Reigate to the northwest. The town is continuous with the village of Felbridge to the northwest. Until 1974 East Grinstead was the centre for local government - East Grinstead Urban District Council - and was located in the county of East Sussex. East Grinstead, along with Haywards Heath and Burgess Hill, as part of the former Cuckfield Rural District Council, came together as Mid-Sussex; moving to the jurisdiction of West Sussex County Council. The town has many historic buildings and is located on the Greenwich Meridian. It is located in the Weald and Ashdown Forest lies to the south of the town.

The club was established on 8 May 1890 as East Grinstead F.C. and did not play their first competitive match until 1900, when they were founder members of the Mid-Sussex League. They won the league in 1902, and in 1909 were joint winners of the Sussex Junior Cup. In 1920 they were founder members of the Sussex County League, and finished bottom of the table in its first season. After finishing eleventh out of twelve the following season, they left the league. They returned in 1924, but after finishing bottom of the table again in both 1924–25 and 1925–26, they left again after failing to be re-elected and dropped into the Brighton League. In 1930 they transferred to the Southern Amateur League, winning Division Three in 1931–32. They returned to the Mid-Sussex, and after winning it in 1936–37, returned to the Sussex County League for a third spell. In the first season after World War II they were placed in the Eastern Division, but the league returned to a single division for the 1946–47 season. After a second division was added in 1952, East Grinstead remained in Division One until 1979, when they were relegated to Division Two. In 1988–89 they finished bottom of the division and were relegated to Division Three. After finishing third in 1990–91 they were promoted to Division Two, and two seasons later they finished third again, earning promotion to Division One.

A Friday evening Sussex County League fixture was enough to entice this Pieman to East Court. The home side did just enough to defeat visitors Newhaven 2-1. 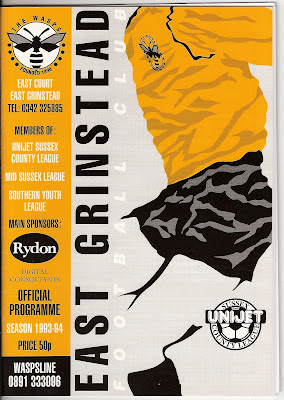