Northampton is the county town of Northamptonshire in the East Midlands. It lies on the River Nene, situated about 67 miles north-west of London and around 50 miles south-east of Birmingham. With the Norman conquest of England, the town rose to national significance: its geographical location in the centre of England made Northampton a valuable strategical point for government and as a convenient meeting place for political, social, ecclesiastical and military events. Markets and fairs were a key element in the town's economy in medieval times. The Market Square came to prominence in 1235 when Henry III ordered that the selling of goods in the churchyard of All Saint's should be relocated to the Market Square. Street names in the town give an indication of trades and market centres; Corn Hill, Malt Hill, Mercer Row, Gold Street, Sheep Street and Horse Market. Cloth and wool were very important but these industries declined. In the 13th century, Northampton had a large Jewish population centred around Gold Street. In 1277—two years after Edward I passed the Statute of the Jewry—some Jewish residents were executed while the remainder were driven out of town. Archaeological sites include a medieval Jewish cemetery and the Northampton Medieval Synagogue. 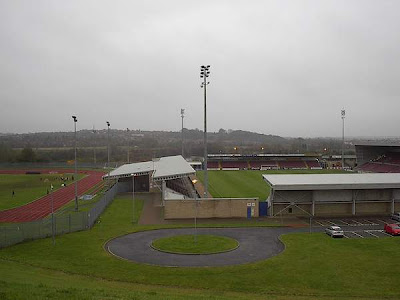 Having formed in 1897 Northampton Town Football club had fallen on hard times and eventually went into administration in April 1992, with debts of around £1,600,000. Ten players were sacked and youth players were drafted in to make up the numbers; results did not improve. These events sparked the formation of the Northampton Town Supporters Trust, which has a share holding in the club and a representative on the Board of Directors. This was the first such instance of a supporters' trust taking over a football club. 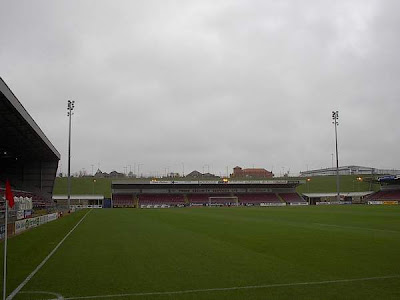 The club needed to win the final game of the 1992–93 season to avoid being relegated to the Conference. Over 2,500 made the trip to Shrewsbury Town and saw the Cobblers win 3–2, despite being 2–0 down at half-time. The 1993–94 season got worse for the Cobblers as they finished bottom of the Football League for the only time in the club's history. Relegation was only escaped due the Conference Champions, Kidderminster Harriers not meeting the necessary ground criteria. The club eventually moved to Sixfields Stadium and a capacity crowd ensued on 15 October 1994, when Barnet were the visitors in a 1–1 draw. 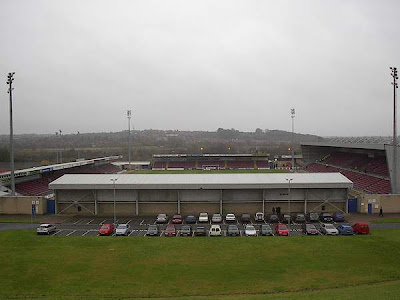 This Pieman visited Sixfields, having travelled from London Euston to Northampton by train. The walk to the stadium took around 25 minutes heading away from the town centre direction. My view from the main stand was very good and a decent match saw the points shared. 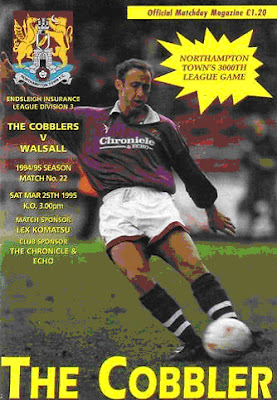