Blyth is a town in southeast Northumberland. It lies on the coast, to the south of the River Blyth and is approximately 13 miles northeast of Newcastle upon Tyne. The port of Blyth dates from the 12th century, but the development of the modern town only began in the first quarter of the 18th century. The main industries which helped the town prosper were coal mining and shipbuilding, with the salt trade, fishing and the railways also playing an important role. These industries have largely vanished, but the port still thrives, shipping paper and pulp from Scandinavia for the newspaper industries. The town was seriously affected when its principal industries went into decline, and it has undergone much regeneration since the early 1990s.

Blyth Spartans FC was founded by Mr. Fred Stoker in September 1899, who was the club's first secretary before forming a practice as a distinguished physician in London's Harley Street. He thought it appropriate to name the team after the Greek Spartan army in the hope that the players would give their all as they went into "battle" on the field of play. In 1913 the club moved upward joining the ranks of the semi professionals in the North Eastern League and remained there until it folded in 1958. The fierce competition meant that honours were few and far between, the league was however won in the 1936–37 season and the league cup won in 1950 and again in 1955. After the demise of the North Eastern League the club tried their luck in the Midland League and Northern Counties League, both ending when the leagues folded. The early 1960s saw the revival of the North Eastern League with the club doing quite well. However the league suffered many problems and eventually folded for good. The club was now at a loss for a suitable semi-professional league and in 1964 decided to turn amateur and join the ranks of the Northern League. During the 29 years the club were members their record was second to none, winning the Championship on 10 occasions and being runners up 5 times. However, a new regime at the club were keen to progress up the league pyramid and a successful push ended with promotion to the Northern Premier League in the 1993–94 season.

This Pieman was able to visit Croft Park on a bleak Saturday afternoon in January. Travelling north for a Sunday match at Sunderland, the intention was to watch Gateshead on the Saturday. However, adverse weather conditions (snow and ice) put paid to that. Blyth being further north managed to escape the low temperatures and having caught a bus from the centre of Newcastle, it was good to witness a fine contest against Radcliffe Borough. The home side eventually won 4-2. 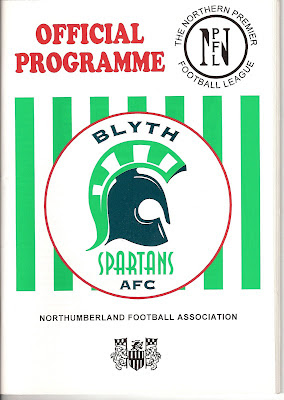