Stirling is renowned as the Gateway to the Highlands and is generally regarded as occupying a strategic position at the point where the flatter largely undulating Scottish Lowlands meet the rugged slopes of the Highlands. The starkness of this contrast is evidenced by the many hills and mountains of the lower Highlands such as Ben Vorlich and Ben Ledi which can be seen to the northwest of the city. On the other hand, to the east of the city, the Carse of Stirling is one of the flattest and most agriculturally productive expanses of land in the whole of Scotland.


We were embarking on a weeks holiday in Scotland, based in Stirling. We only discovered that Stirling Albion were playing Motherwell in a pre-season friendly match as we travelled and so it was a quick dash to our lodgings to deposit luggage and then a taxi ride to the Forthbank Stadium. In truth it is probably only a 20 minute walk from town, as we discovered after the match, but we did not have time to spare.

Forthbank Stadium is set against the backdrop of Stirling Castle, the Wallace Monument and the Ochils. At the time of this visit the stadium was relatively new, Stirling Albion have moved there from their former Annfield home in 1993. On a sunny Saturday afternoon it looked like Motherwell would win this match courtesy of Jamie Dolan's strike from outside the box. However, Albion captain Tommy Tait was having none of this and claimed a draw when he slotted home in the 88th minute. 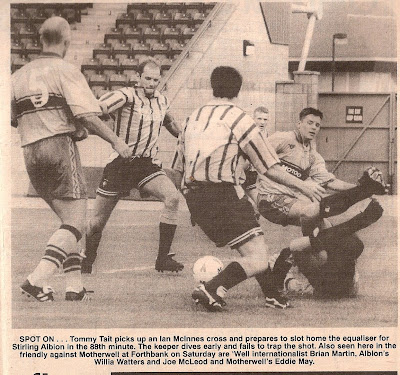