Milton is a village and civil parish about 3 miles west of Didcot and a similar distance south of Abingdon. In 956 King Eadwig granted 15 hides of land at Milton to Alfwin, who in turn gave the estate to the Benedictine Abingdon Abbey. In the Dissolution of the Monasteries in the 1530s the abbey surrendered its lands to the Crown. Milton was among a number of estates that Henry VIII granted to Baron Wriothesley in 1546. Wriothesley sold Milton that same year to Thomas Calton, a goldsmith of London, whose descendants retained it for the next two centuries. In 1709 Paul Calton married Catherine, daughter of Admiral John Benbow. In 1764 Catherine, Martha and Mary Calton sold the estate to Isaac Barrett, in whose family the property remains. Milton House is a yellow and red brick manor house built for the Calton family in the 17th century. The original building is of five bays and three storeys and in 1796 short two-storey wings were added to the house for Bryant Barrett. The house, gardens and park are open to the public on certain dates between Easter Sunday and 31 August each year.

Milton United FC was a founder member of the North Berks Football League when it was first formed in 1909 and played under the name Milton Hill. The club played in the North Berks league for two seasons before returning again for the 1920–21 season, under the name Milton and finally 'Milton United' in the following season. In 1926 Milton gained their first trophy for beating Aston Tirrold by 8 to 2 in a playoff for the Division 2 (Abingdon) league title. Milton United continued after the war but folded in the early 1950s. The club reformed in 1958 and regained entry to the North Berks League. Milton became champion of the North Berks league for the first time in the 1962–63 Season. The club would then enjoy more league title success during the sixties with three further successes in the 1963–64, 1965–66 and 1969–70 seasons. While the club remained in the top flight throughout most of the seventies, the club suffered relegation to the second tier of the North Berks league at the end of the 1978–79 season. Two seasons later the club bounced back to the top flight when they finished as Champions of Division Two. After being promoted back to the top division in the league the club, then went on to win the league a further three times, during the eighties, in the 1985–86, 1987–88 and 1988–89 seasons. The club also ended as runners-up in the Berks and Bucks intermediate cup in 1984. In 1989 they applied to join the Hellenic Football League. The application was successful and finished as runners up in their first season in both the first division & the Division One Cup, and winning the Berks and Bucks Intermediate cup. As a consequence of their runners-up position they were promoted to the premier league and became champions of the premier league at their first attempt. They also retained the Berks and Bucks intermediate trophy. The Season after winning the Premier Division, the club made its debut in the FA Vase reaching the first round before being knocked out by Thame United. The club stayed in the premier Division until the end of the 1993–94 season, when the club was demoted to Division one because of the club not having floodlights.

This Pieman visited The High Street Ground on FA Cup Final morning, this match kicking off early for that reason. I was fortunate to be offered a lift which certainly made travelling easier. The home side defeated Wantage Town 3-1 in this Hellenic League clash. After the match I was home in time to see Everton lift the cup in the day's other match. 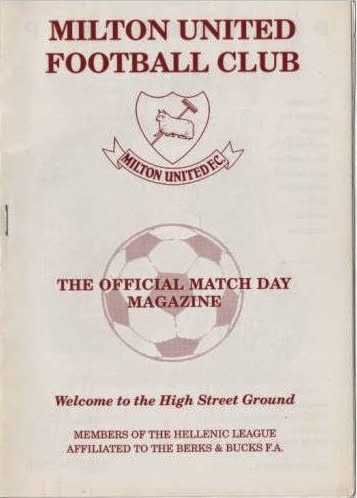