Walton-on-Thames is a town on the River Thames in the Elmbridge borough of Surrey. The town is centred 15.3 miles (24.6 km) south west of Charing Cross and is between the towns of Weybridge and Molesey. The name "Walton" is Anglo-Saxon in origin and is believed to mean "Briton settlement" (literally, "Welsh Town" - wealas tun). Even before the Romans and the Saxons were present, there was a Celtic settlement here. The Anglo-Saxon word for the Celtic inhabitants who lived here before them is "Wealas", meaning "foreigners" or "strangers". Walton was also identified by William Camden as the place where Julius Caesar forded the River Thames on his second invasion of Britain. However, according to the Elmbridge Museum, there is no evidence to support this. Walton appears in the Doomsday Book of 1086 as "Waletona. The original village lies in the north, while later development took place in the south, closer to the railway station. St. Mary's Parish Church is of Saxon origin, with parts dating back to the 12th century. The square flint tower, supported by a 19th-century brick buttress, contains a ring of 8 bells, the oldest bearing the date 1606. In World War II, owing largely to the proximity of important aircraft factories at nearby Brooklands, the town was bombed on various occasions by the Luftwaffe. On 27 September 1940, fighter pilot F/Sgt. Charles Sydney, who was based with 92 Squadron at RAF Biggin Hill, died when his Spitfire (R6767) crashed in Station Avenue. He was buried in Orpington and is commemorated today by a memorial plaque close to the crash site. 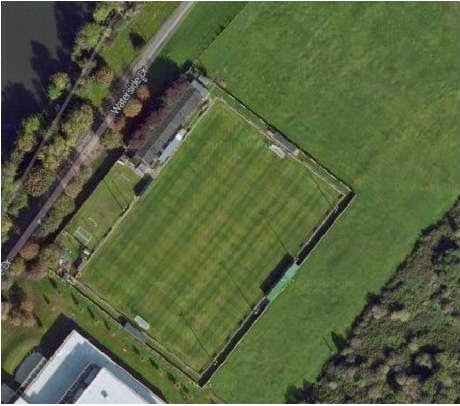 Walton Casuals Football Club was founded in July 1948 and owed its early origins to members of the Armed Forces, who formed a Sunday side playing only friendly fixtures during the 1946-47 season. The club started off in Division One of the Surrey Intermediate (Central) League, playing at Elm Grove Recreation Ground, gaining promotion to the Premier Division in 1952-53, in which Walton Casuals finished runners-up on 3 occasions: 1954-55, 1956-57 and 1964-65. The Surrey Intermediate (Central) League disbanded in 1965 and the club moved into the League’s Western Section for three seasons. In 1969 Casuals joined the new Surrey Senior League and moved into its current home at Franklyn Road. Two years later Casuals became founder members of the Suburban League, playing one season at Walton & Hersham’s Stompond Lane ground before moving to Addlestone’s Liberty Lane ground for eight seasons and then returning to Franklyn Road where the Reserves had been continuing playing in the Surrey Combination League. The 1982-83 season saw Casuals win their first major honour, becoming champions of the Southern Section of the Suburban League and setting a League record of going 23 games unbeaten under manager Kim Harris. The following year Casuals were runners-up behind Sutton United and in the 1986-87 season reached the Surrey Premier Cup Final, only to lose to Croydon. Subsequent years saw the club slip into a steady decline and it was regularly finishing in the bottom two of the Suburban League. After 21 years of competing in the Suburban League, the club decided to switch to the Surrey Premier League in June 1992 in order to join the pyramid system. A year of consolidation paved the way for major changes at Franklyn Road the following summer as Kim Harris was reappointed as manager after a successful spell at Hersham RBL and the club expanded into both Sunday and youth football. In 1993-94 Casuals won the Surrey Premier League Challenge Cup, defeating Holmesdale after a replay, and in 1994-95 the club finished runners-up to Chobham in the League and were losing finalists to Vandyke in the Challenge Cup. During the summer the club was promoted to the Combined Counties League.

This Pieman visited Franklyn Road by catching a train to Walton-on-Thames from where it took around half an hour to walk to this riverside venue. Hersham Station is not as close but is served by a direct by service. The home side comfortably defeated Bedfont in this Combined Counties League encounter. 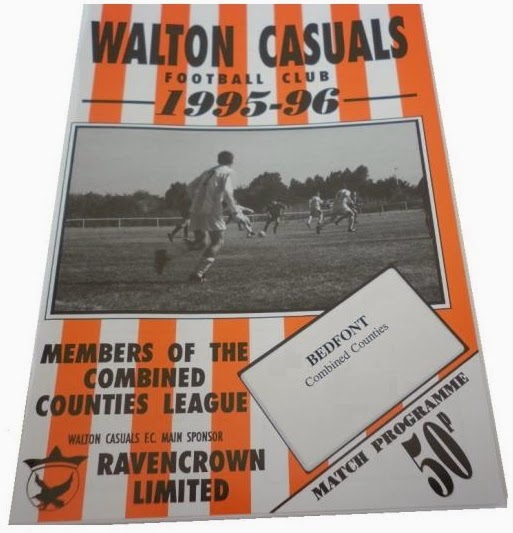