Letchworth, officially Letchworth Garden City, is a town in Hertfordshire, England. The town's name is taken from one of the three villages it surrounded (the other two being Willian and Norton) – all of which featured in the Doomsday Book. The land used was purchased by Quakers who had intended to farm the area and build a Quaker community. The parish church of St Mary was built in the 12th or 13th Century. The village was located along the road now called Letchworth Lane, stretching from St Mary's and the adjoining medieval manor house (now Letchworth Hall Hotel) up to the crossroads of Letchworth Lane, Hitchin Road, Baldock Road and Green Lane, where there was a post office. Letchworth was a relatively small parish, having a population in 1801 of 67, rising to 96 by 1901. In 1898, the social reformer Ebenezer Howard wrote a book entitled To-morrow: A Peaceful Path to Real Reform (later republished as Garden Cities of To-morrow), in which he advocated the construction of a new kind of town, summed up in his Three Magnets diagram as combining the advantages of cities and the countryside while eliminating their disadvantages. Industry would be kept separate from residential areas—such zoning was a new idea at the time—and trees and open spaces would prevail everywhere. His ideas were mocked in the press but struck a chord with many, especially members of the Arts and Crafts movement and the Quakers. A railway station was opened in 1903 a few hundred yards west of its current position and railway companies often ran excursions to the town, bringing people to marvel at the social experiment and sometimes to mock it. The Parish Council continued to meet in a relatively informal way until 1910 when the first council elections took place for 16 seats. In 1919 Letchworth Urban District Council (UDC) was formed, replacing the Parish Council, and taking over responsibility from Hitchin RDC for the local services - such as libraries, museums, parks and leisure - which were not the responsibility of the county council. Although the council had no active role in town planning and building control until after 1945, it built nearly 5,000 homes in the town. On 1 October 1995, the 'Foundation day' event took place celebrating the 100th anniversary of the establishment of Letchworth. Markets and stalls ran throughout the day, whilst a fun fair was erected in Norton Common, where tribute bands performed and a fireworks display was held. 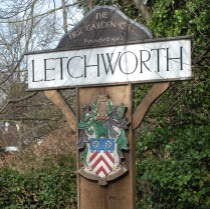 Letchworth FC is a football club based at the County Ground (previously known as Baldock Road). Originally known as Letchworth Athletic and Letchworth Town they changed their name to Letchworth Garden City in 1976, before becoming just Letchworth in 1995. After spending their early history in local Hertfordshire leagues, they moved up to the Delphian League in 1956, up to the Corinthian League in 1959, and when that league disbanded in 1963, joined the expanding Athenian League. In the 1974–75 season they won the Athenian League. The following season they joined the Isthmian League Division Two, and for the next twelve years were consistent finishing in the top eight on six occasions. In the late 1970s Paul Bowgett who signed for Tottenham Hotspur would emerge from Letchworth. In the 1980s Letchworth won a cup semi-final against local rivals Stevenage Borough, coming out 3–2 winners in front of the biggest crowd at Baldock Road for many years. By the late 1980s the club had entered a period of decline, and the established close-knit team had begun to break up, age and injuries taking their inevitable toll. From a respectable 11th in 1987–88 they finished one place off the bottom next season and were rock bottom of Division Two North in 89–90. Relegation was decided by a two leg play-off against Division Two South Horsham, played home and away on consecutive nights, they drew the home leg, lost the away leg and their relegation from the league was confirmed. In 1990–91 the team played in the South Midlands League Premier Division, a step down in standards. They finished 6th in their first season, thereby missing the chance to immediately regain their previous status, and from there on the decline continued at a dramatic rate. The next four seasons were poor, and they were relegated again at the end of the 1994–95 season. 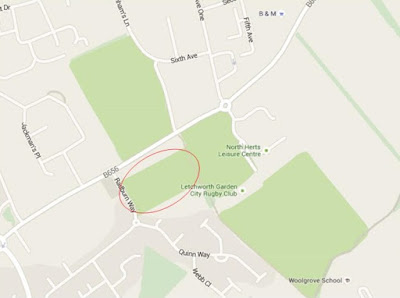 This Pieman travelled by train from Cheshunt via the two Hertford stations to Letchworth. The walk to the ground taking around fifteen minutes. A keenly contested match saw visitors Potters Bar Town emerge with the points courtesy of a 3-2 victory. 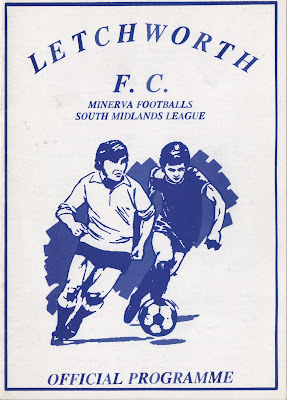