Historically a part of County Durham, there were three original settlements on the site of modern-day Sunderland. On the north side of the river, Monkwearmouth was settled in 674 when Benedict Biscop founded the Wearmouth-Jarrow monastery. Opposite the monastery on the south bank, Bishopwearmouth was founded in 930. A small fishing village called Sunderland, located toward the mouth of the river (modern day East End) was granted a charter in 1179. Lewis Carroll was a frequent visitor to the area. He wrote most of Jabberwocky at Whitburn as well as "The Walrus and the Carpenter". Some parts of the area are also widely believed to be the inspiration for his Alice in Wonderland stories, such as Hylton Castle and Backhouse Park. There is a statue to Carroll in Whitburn library. 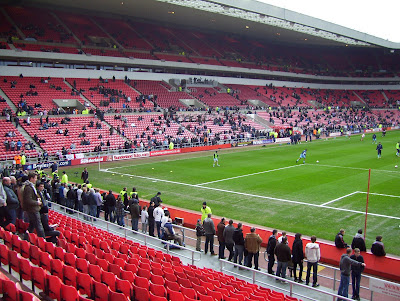 My first visit to the Stadium of Light. We travelled by train to Newcastle from where a connecting service took us from Tyneside to Wearside. A journey I had undertaken many times previously when visiting Sunderland' former home, the historic Roker Park.

On approaching Sunderland you actually see the Stadium of Light, shortly before crossing the Wear Estuary. Since this visit, the Tyne & Wear Metro has been extended to Sunderland and a couple of stations, St Peters and Stadium of Light are very close to the ground in Monkwearmouth. Having said that Sunderland Station is only a 10 minute walk across the bridge from the stadium.

As for the match, some extremely negative tactics from George Graham enabled Sunderland to take the initiative and despite a goal from Stefan Iverson, the assembled 41,904 saw a tame Spurs side surrender the points.