Belper is a town within the local government district of Amber Valley in Derbyshire, England. It is eight miles north of Derby, on the A6, by the River Derwent. At the time of the Norman occupation, Belper was part of the land centred on Duffield held by the family of Henry de Ferrers. The Doomsday Survey records a manor of "Bradley" which is thought to have been somewhere in the vicinity of the Coppice. At that time it was probably within the Forest of East Derbyshire which covered the whole of the county east of the Derwent. It was possibly appropriated by William de Ferrers, 4th Earl of Derby at some time after it was dis-afforested in 1225 and became part of Duffield Frith. 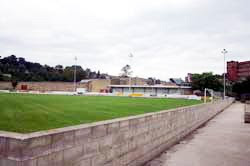 This Pieman’s visit to Christchurch Meadow was an opportunist one. Spurs were playing a lunchtime Saturday fixture at Pride Park. On conclusion of that fixture we opted to get back to the railway station which proved a good move as the traffic around the ground was gridlocked. A taxi ride in heavy rain had us doubting if we would see a 2nd match, but on arrival we were pleased to see the ground open and visitors Gretna along with the home side were warming up.

I recall some excellent hot food at the ground and a pretty decent Gretna performance too. We made our way back to Derby by train, stopping off at the Alexandra for some fine ale, before heading back to London. 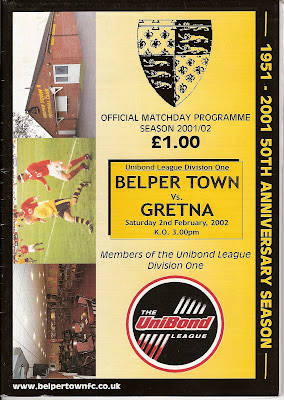