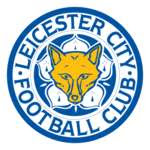 Leicester is the largest city and unitary authority area in the East Midlands of England, and is the traditional county town of Leicestershire. Leicester became a town of considerable importance by Medieval times. It was mentioned in the Doomsday Book as 'civitas' (city), but Leicester lost its city status in the 11th century owing to power struggles between the Church and the aristocracy. It was eventually re-made a city in 1919, and the Church of St Martin became Leicester Cathedral in 1927. The tomb of King Richard III is located in the central nave of the church although he is not actually buried there. "Chisit" is the regional nickname and dialect for the people of Leicester. They are often referred to as Chisits because of how they speak and more commonly of how they pronounce the question 'how much is it'? sounding - in the Leicester dialect, like 'im a Chisit'. The nickname was given to the Leicester folk from the inhabitants of the Lincolnshire seaside town of Skegness which is a popular holiday destination for the people of Leicester. 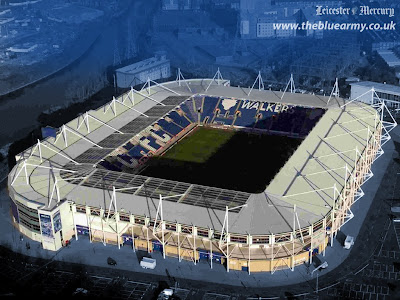 This was my first visit to the Walkers Stadium. We travelled to Leicester by train from London St Pancras and visited a public house away from the stadium area to enjoy a pleasant lunchtime drink. We were familiar with the area as we used the same pub often before matches at Filbert Street. The Walkers Stadium is only a few hundred yards away from the old ground and this Pieman was at the last competitive match there when Spurs visited. 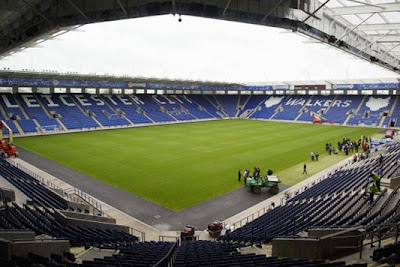 The Walkers Stadium is certainly an improvement on the old place, which with the exception of one modern stand had become very dated. However, like many new venues, it can not match Filbert Street for character. Spurs struggled for the majority of this match and it looked like Leicester City would claim all three points. Late on in the game however, a wonder strike from South African Mabiizela "he will never score another like that" (he never scored another at all - Ed) and a late Kanoute goal, robbed the foxes and the points headed to London N17. 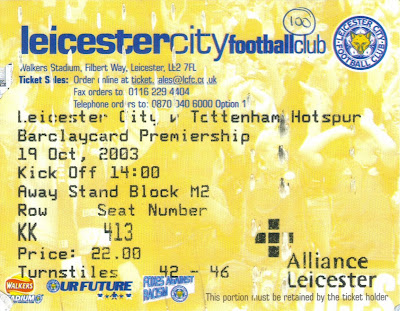