The town of Tunbridge Wells began with a chalybeate spring. Chalybeate means it contains iron. Rainwater fell on ground containing iron deposits, soaked through them then rose in a spring. The iron deposits in the spring water stained the ground around the spring a rusty colour. The spring stood by a common where local people grazed their livestock. In the early 17th century people believed that they would be healed from diseases if they bathed in or drank from certain spas. In the year 1606 a nobleman, Lord North, who was staying at Edridge was out for a ride. He came across the spring with rust coloured edges and wondered if it had health giving properties. (At the time he was suffering from tuberculosis or some similar disease). He drank some of the spring water and was, he said, healed from his illness. When he returned to London he told all his rich friends about the spring and soon many people flocked to drink from it. I am unable to give the usual public transport details as I travelled on the unofficial Cray Wanderers supporters transport - Jon Smith's car. However, the station I believe is a hike and on a dark evening this ground could easily be missed as it is down a dip in a remote part of town. Jon (left), as some will remember, switched from supporting Spurs to following the fortunes of his beloved Cray and was rewarded when they won the Kent League championship. Jon watches all of Cray's matches and often makes up the entire crowd behind the goal at away matches where thick cigar smoke can be seen billowing over the ground and the rest of the surrounding area. Jon wishes to be remembered to those who know him. He also has a strong liking for tomato ketchup and hot indian curry. Cray won this match comfortably and looked a very competent side. I stood behind the goal with our hero for the majority of the match and enjoyed listing to the banter. As can be seen from the photographs, there is ample covered accomodation for the level of football and the Culverden Stadium is a nice place to visit. 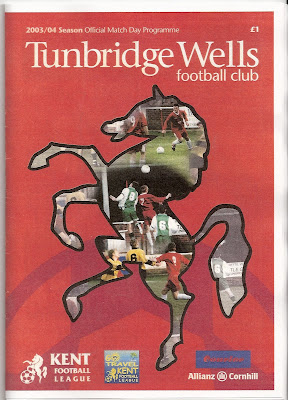