Coatbridge is a town in North Lanarkshire, Scotland approximately 9 miles east of Glasgow. At the 2001 Census it had a population of 41,170 making it the 23rd largest town or city in Scotland. In the 19th century, fuelled by the local discovery of ironstone, Coatbridge became a major centre for the iron and steel industry. The town expanded quickly and the new industries assisted the massive impact Glasgow made on the world of shipbuilding. However, with the decline of shipbuilding on the River Clyde in the mid 1900s the demand for iron and steel dropped. This led the iron and coal industries to collapse which led to poverty and deprivation which in turn led to drastic population fall from approximately 90,000 at the end of the 19th century to today's level.


A late morning flight from Stansted enabled me to reach Glasgow mid-afternoon. Despite rain throughout the day, all 5 of the scheduled Friday evening matches went ahead. My choice being the short journey to Coatbridge, home of Albion Rovers. I travelled from Glasgow Queen Street (low level) station, alighting at Coatdyke from where a short walk enabled me to reach the ground.

Gretna, who I had seen in their non-league days at venues such as Whitley Bay and Belper Town, now had a wealthy backer and were already looking a good promotion bet. The Cliftonhill Stadium is another venue that has seen better days. For my visit, as is the norm, only one side of the ground was open. It poured with rain throughout the match and despite being under cover the terracing in front of the main stand was still liable for a soaking via the unintended ventilation gaps. On the terracing at Cliftonhill there was a fan known as 'Mad Professor' if I recall correctly, taking travel bookings for the next away match.

Gretna were good value for their 3-1 victory, playing some neat football in the process. This was the 1st leg of my epic 3 matches in less than 48 hours in Scotland. It was followed by a Saturday lunchtime encounter between Stranraer and Peterhead. The conclusion being a Sunday afternoon fixture between Dumbarton and Airdrie United. This adjustment to the fixture list was caused by Scotland taking on Holland over 2 legs in a European Championship Qualifying Play-Off. 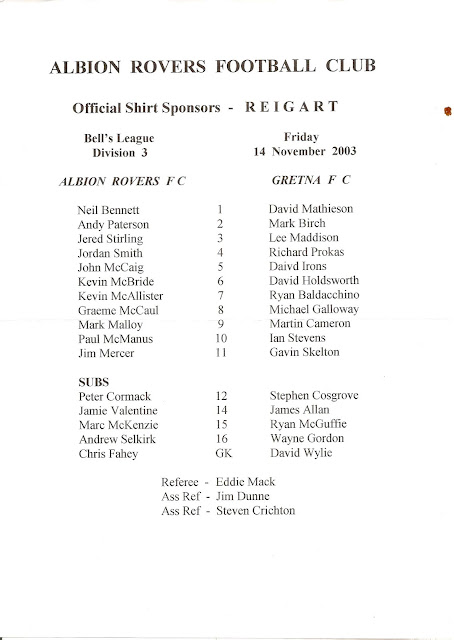 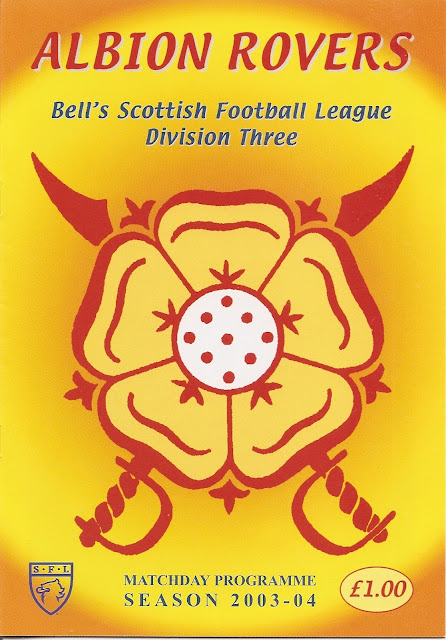