Grantham is a market town within the South Kesteven district of Lincolnshire, located along the course of the River Witham, to the south-southwest of the city of Lincoln. The town is best known as the birthplace and childhood home of former Prime Minister Margaret Thatcher. The town is situated within short walking distance of an ancient Roman road, and was the scene of Oliver Cromwell's first advantage over Royalists during the English Civil War.

A Good Friday evening match at Goodison Park set the scene for a visit elsewhere the following day. On Merseyside we stayed in the Waterloo district and Ian Scott kindly made the accommodation arrangements. Ian as many of you know was a planner and spotting that this was Easter weekend booked us in to a guest house run by Augustinian sisters!


We chose this venue as it was close to the A1 and it would be an easy get away. This was proved as I was home at Cheshunt before 7pm. Grantham play at the South Kesteven Sports Stadium (probably 35 minutes walk from the station). It is a relatively new ground (1991) and houses a running track too. It is a very open venue and on our visit was fairly chilly. Lincolnshire being flat and open, this area was no exception. Apart from the main stand, the other covered area is terracing situated on the opposite side of the ground.

Stafford Rangers FC was enjoying a good season and in the end comfortably beat their hosts 2-0. The clubhouse, at the rear of the main stand, is good with hot food available and a bonus was the real ale option (local Grantham brew Oldershaw's OSB). 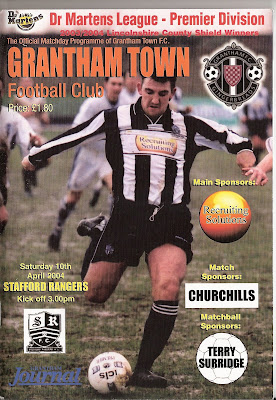