Didcot has a remote antiquity, one that stretches back over the past two thousand or more years. At the time of the Roman Conquest, the future parish was probably an area of part farmland, wood and marsh, but the greater emphasis was on marsh; which comprised practically half of the future Didcot. Today, the parish church (which sits on the highest point) and the houses and streets of the old village still straddle the southern incline of that ridge. The first settlement was Iron Age in origin, which after the Conquest became Romano-British. A Saxon settlement followed, dating to the 7th or 8th centuries. This fortified farm or early village, however, was called Wibaldeston or 'Wigbald's farm’, not Didcot; and it is this place- name that appears in the entry in the Doomsday Inquest. Didcot in Saxon was derived from 'Dydda's or Dudda's cot' or cottage. The village, up to the end of the 19th century, was known as Dudcot or Dudcote.

With such mild weather and a decent train service from Paddington, I was tempted into a midweek jaunt to Oxfordshire. Didcot are the current holders of the FA Vase having lifted the trophy at White Hart Lane last May. As you would expect, winning a national trophy would give a boost to any club and Didcot are attracting good attendances. Didcot is on the mainline from Paddington and the Loop Meadow Stadium is just over 5 minutes walk from the station. 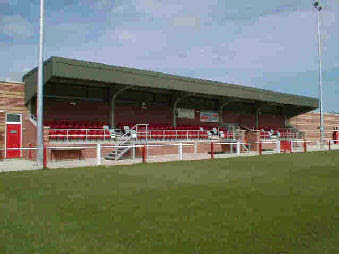 Alarmingly, Didcot play in red shirts with white sleeves and the club crest is a cannon! However, despite this I was impressed with their attractive, attacking football. They were always on top and could easily have scored more than their four goal tally. Once again I was impressed by the standard of football in the Hellenic League, opponents Witney United played their part too. My woolly hat came in useful as the early November chill took effect as the evening wore on. Those attending the Reebok Stadium next Monday might not be as keen to see this fashion accessory but I need it. I still prefer it to that dodgy jumper bearing the flag of St George that one Merton resident sports. Walking back to the station after the match, I felt the first spots of rain coming in from the west and I was comforted in the knowledge that I was heading east. Plymouth Argyle v Leicester City was abandoned due to a waterlogged pitch. The late running 21.35 (arrived 21.56) got me back to Paddington for 23.00. 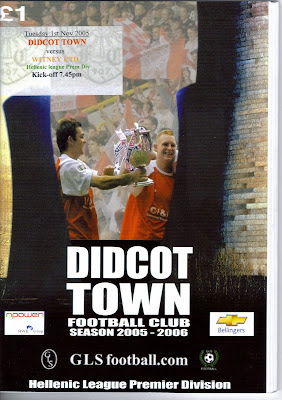