Great Wakering is a large village, pleasantly situated on rising ground above the marshes. One mile from the sea shore, 5 miles East South East of Rochford, and 4½ miles East North East of Southend. It was just as well that we were driven to and from the ground as, although we could have reached Great Wakering before the match by local bus, there has to be doubts if post match we would have been so lucky. A glance at the map shows Great Wakering close to Shoeburyness and yet still quite isolated. To find the Burroughs Park ground you have to have your wits about you. Although situated just off the High Street, you can easily miss it - we found it tucked up a lane next to the British Legion. 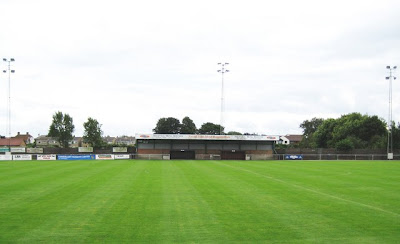 This 'village' club have made tremendous strides, both on and off the pitch, in reaching their present Southern League status via progression through the Essex Senior and Isthmian Leagues. A glance at their history shows them playing intermediate football as recently as 1992. The stadium has clearly undergone tremendous transformation in order to get it up to the required standard and for such a relatively small place Great Wakering puts a lot of bigger towns to shame. Covered terracing, a decent stand, fine clubhouse and decent pitch side refreshments. Of course a lot depends on the commitment received from volunteers but Great Wakering appears to be well off in that department. 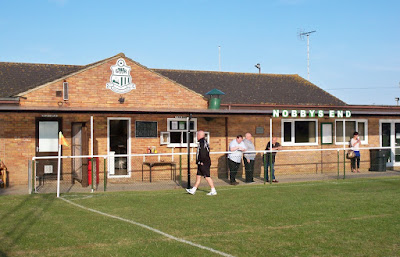 The opposition for this fixture was Sittingbourne FC. A decent end to end game ensued with no little skill. Rovers in their Green and White were always the better side but could not relax until they got the all important second goal towards the end of the match. 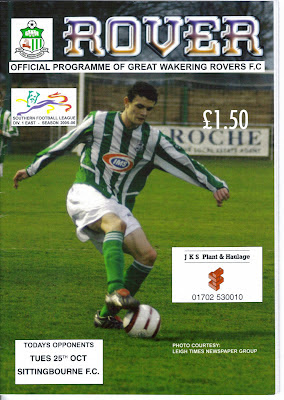