Gloucester is located on the eastern bank of the River Severn, 114 miles west-north-west of London. It is sheltered by the Cotswolds to the east, while the Forest of Dean and the Malvern Hills rise prominently to the west and north-west, respectively. The Siege of Gloucester in 1643 was an important battle of the English Civil War in which the besieged parliamentarians emerged victorious. A weekend away - we based ourselves in Cheltenham. This delightful place is certainly worth exploring further. We stayed at the Travelodge on the edge of town and took advantage of the excellent 'park and ride' facilities (£1-60 return per car!) just across the road from our digs.

A short train journey from Cheltenham took us to Gloucester. Our first port of call was the local folk museum which was very good. On this occasion a group of World War 2 ladies were having a reunion, demonstrating the art of 'knitting in wartime'. My daughter was invited to learn and enjoyed the experience.However, Harry Hotspur was less enthusiastic and soon he and I departed for our chosen afternoon activity, Gloucester City v Northwood in the Premier Division of the Southern League. A 1.30 start had been arranged to accommodate those (players too I guess) that wanted to watch England v Austria. From what I hear, backed up by Rosie's report, it seems that the WW2 knitting might have been preferable. They did win though and Germany will now be eagerly anticipating the arrival of our fans along with the Dutch!


Anyway back to the real stuff. This was loosely billed as a six pointer with the teams occupying the basement league positions. The match was closely contested and as they admit themselves, the Tigers were a bit fortunate to benefit from the 4-1 score line. Northwood never gave up and on another day would have gained at least a draw. The Meadow Park stadium is of a decent standard with plenty of covered terracing along one side and behind one goal. 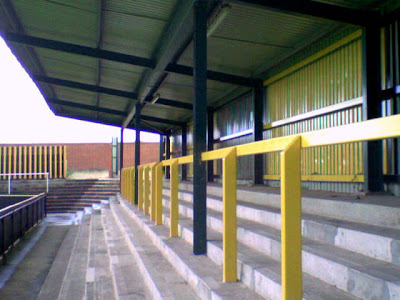 There is also a large seated stand along one side. The match was played in constant drizzle but it was not until the relatively short 20 minute stroll back to town that we began to appreciate what Dr Foster had to contend with - 'cats and dogs' but fortunately not the same puddle.Gloucester is another venue worthy of further exploration. Although a 'could be anywhere in the UK' type shopping area, you are within easy reach of a number of attractions including a cathedral, historic dockyard and numerous museums. Not that I was able to partake but there is a good variety of real ale establishments too. 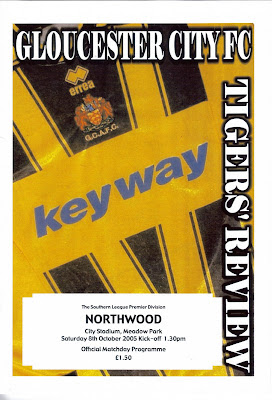