Coventry is the eighth largest city in England and the eleventh largest in the UK. Coventry is traditionally believed to have been established in the year 1043 with the founding of a Benedictine Abbey by Leofric, Earl of Mercia and his wife Lady Godiva (who, according to legend, rode naked through the streets of in order to gain a remission of the oppressive toll imposed by her husband on his tenants). Has anyone noticed the last four digits of Coventry City FC's telephone number? - 0870 421 1987. Well I suppose if it the only recordable event in the club's history then I ought to forgive them!

I first saw Spurs at Highfield Road in 1976/77 and every time since, therefore it did seem strange attending a Coventry home fixture at a different venue. I was able to cadge a lift and we took advantage of the 'Park and Walk' facility. On leaving the M6 we parked up and 10 minutes later were at the Ricoh Arena. It is no exaggeration to say that this is a splendid venue; the design enables a good view from all areas. My seat was 4 rows from the front and swirling rain for most of the match meant that every so often I was treated to a refreshing vapour. By half time most of my new found Sky Blue chums had vacated to rows further back but I am made of sterner stuff. Having said that, at the break I was able to wander to the other side of the stadium and settled for 'doing a Throp' for the second period. Paul Throp advocates the corner panoramic view at matches and I agree that this gives a very good view. 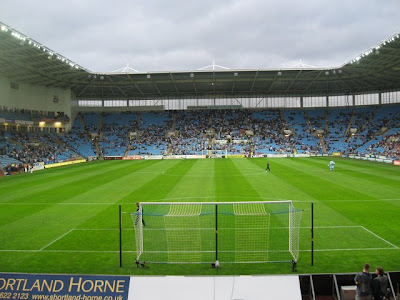 Coventry won the match 3-1 but were far from convincing. Watford if they had taken their chances and made the most of long periods of dominance would/should have won. Worryingly the floodlights went out twice; once before kick off and once early into the match. On reflection (sorry) it was dimly lit before both failures which were only for a matter of seconds. After the second failure the delighted tannoy announcer stated 'we are back on mains power!' - I don't recall being told that we were not in the first place. Teething problems perhaps? The ground was half full and City are not blessed with a large fan base. Plenty of tickets therefore for visitors. I am unable to provide information relating to the proximity to the railway station but can confirm that there were plenty of buses outside the stadium at the end of the match. Back home in bed before midnight - a decent trip indeed. 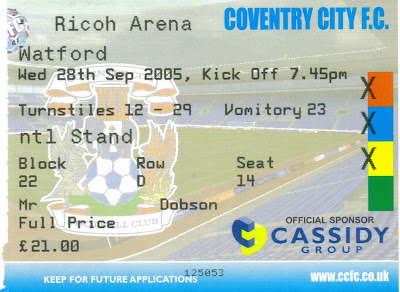 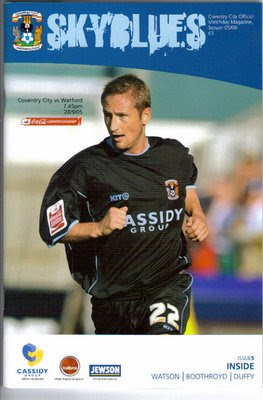