The history of a settlement near modern-day Airdrie may be dated back to AD 577, which was the year of the Battle of Arderyth. This was a battle between Rydderych The Bountiful, King of Strathclyde, and Aeddam The Perfidious, King of Kintyre. While few have heard of the main protagonists, amongst Aeddam's contingent was the Celtic bard, Merlin. Merlin's patron, Gwennddolan, was killed during the battle in which Merlin was awarded for his verses recording the battle. The history of Airdrie between the Battle of Arderyth and AD 1162 is unclear, due to the scarcity of written historical records. Airdrie owes its existence to its location on the "Hogs Back" - the ridge of land running from east to west.

This jaunt to Scotland provided such an opportunity. Once again the relatively cheap Ryanair fares enabled the assembled party to fly from Stansted to Prestwick on the morning of the match. I was joined on this occasion by Dennis, Womble and Karaoke Bob Gilligan. The latter (a true Glaswegian) is always good value on journeys to his homeland, if only to act as interpreter. I should add though that as the day wears on, others sometimes have to substitute for the interpreter if he gets tired. Any beer consumption is purely coincidental.

Having taken the train from Prestwick to Glasgow, we then detoured to Partick in order to sample the real ales on offer at the Three Judges. This bar is possibly the best real ale venue in Glasgow at present. From there we caught a train direct to Drumgelloch, which is the nearest station to Airdrie United's Excelsior Stadium. I would estimate that it takes 15 minutes to walk from there. The Stadium is tidy with uniform seated accommodation on all four sides. 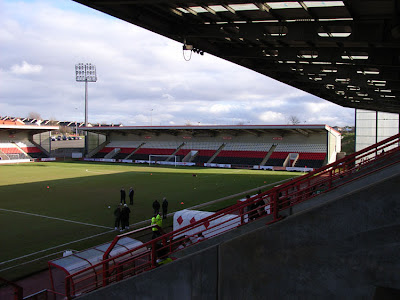 St Mirren edged a keenly contested match by 1-0, the goal being a superbly struck first half free kick. St Mirren were supported by a very large contingent who were rewarded by going top of the division with this result. 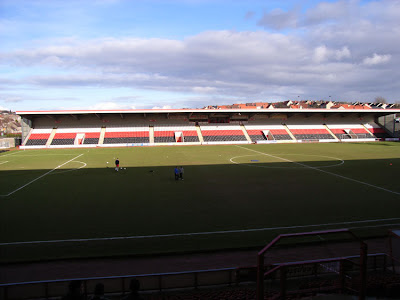 The pies in the ground were good but I would also agree with Andy Scott that any club would have to do well to beat those at Kilmarnock. After the match it was back to Glasgow where we visited the Pot Still, a renowned Whisky establishment also selling real ale and finally the 'Toby Jug' which is next door to the chip shop. I am pleased to report that there was no repeat of the Dennis sausage incident encountered after our Livingston jaunt in May as on this occasion his greed was not challenged (three sausages in batter and chips) - no comments please Duck! We caught the last flight of the day from Prestwick back to Stansted and I was surprised to see a group of Leyton Orient fans doing likewise. They had played at Carlisle and had somehow managed to get between there and Prestwick for what must have been a worthwhile exercise (they won too). Worth looking into for Queen of the South or Gretna! 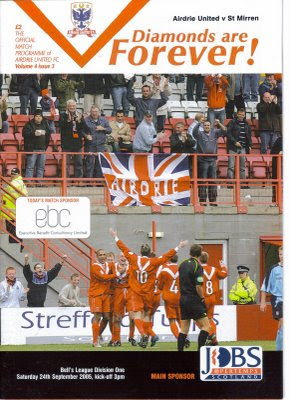