The first historical reference to Basildon is in records from 1086. It is mentioned in the Doomsday Book as 'Belesduna'. The name 'Basildon' means 'Beorhtel's hill' and is derived from the Anglo-Saxon personal name 'Beorhtel' and the Anglo-Saxon word 'dun', meaning hill. In historical documents, this name had various forms over the centuries, including Berdlesdon, Batlesdon and Belesduna. The constituency of Basildon is thought to be a barometer of public opinion in General Elections. The results of the constituency have been the same as the overall result of the General Election since 1974.


I had previously attempted this venue and was thwarted by a very late postponement last season. On that occasion I was able to familiarise myself with some of the back streets of Basildon and a shorter route to the railway station was found. It is certainly fair to say that Basildon United are a club a long way from their recent past when they graced top level Isthmian football.The club, and even more so the ground, have seen better days. If the club were ever to aspire to promotion then considerable work would be needed to smarten (I'm being polite) the ground. The main contributory factor appears to be the lack of support from the local community. Compared to my recent visits to smaller places with presumably less potential as 'football towns' (Ely and Mildenhall) where the community do appear to be involved, this is sad. 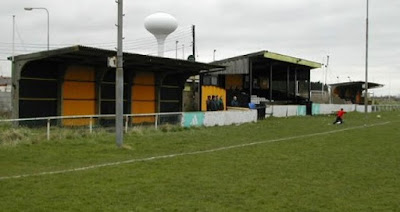 The attendance of 38 was certainly very low and boosted by a good few from visiting Hullbridge Sports. There is a licensed bar at the ground but potential visitors might want to plan ahead if looking for solid refreshments unless of course crisps and nuts will suffice.As for the match, a dull opening half-hour gave way to a progressively better remainder. Basildon scored just before the interval and netted again midway through the second period. Hullbridge, a little unfortunate to have been trailing at the break were stung into life by the second goal and immediately reduced the arrears with a fine shot from 30 yards (Pieman still not metric). However, this was surpassed by a stunning long range equaliser. In the end a decent match with probably the right result.

Basildon railway station is a bit of a trek from the Gardeners Close ground and I had already resigned myself to catching the 22.36 train to Fenchurch Street. However, my reconnaissance mission last season meant I could cut through some housing estates. I remember thinking upon spying a bus stop "wouldn't it be nice if a bus came along!" A minute later I was on a bus clutching a 60p ticket. I was then able to catch the 22.06 to my preferred Liverpool Street, thus increasing the quantity of required beauty sleep. Such adventures!