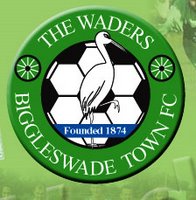 Biggleswade has a rich history and much of its character comes from buildings that have remained largely unchanged over the years. The town centre features the Market Square where a general market is held each Saturday. It is surrounded by shops, many in attractive converted buildings such as the old Market house. The river Ivel runs along the northern and western boundaries of the town causing development to be very one-sided, with housing estates in the east and south. On 22 July 1661, Samuel Pepys stopped off in Biggleswade (called ‘Bigglesworth’ by Pepys) to buy a pair of warm woollen stockings.


Harry Hotspur and I had a wedding reception to attend on Saturday evening, but with careful planning were also able to visit Biggleswade Town FC for their South Midlands League encounter with Royston Town. Having made my last ever trip to Highbury last weekend for the highly charged North London derby, I was privileged on this occasion to witness the last match at Biggleswade Town's Fairfield ground. Biggleswade are relocating to a new ground at Langford Road. The electricity was being disconnected after the match and even if the new venue is not ready for the start of next season, this was 'curtains' for this place. 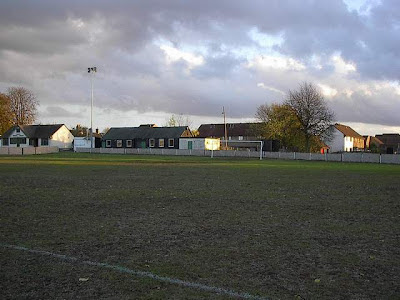 We arrived at Biggleswade railway station via a very busy Finsbury Park (Kings Cross closed for the weekend) and made our way through the bustling market square to the ground which can be reached with a leisurely 15 minute stroll. En route we adjourned to the Coach & Horses just in time to see Wayne Rooney stretchered off at Stamford Bridge. The compounding sight of John Terry limping around the pitch with the title already clinched has to be questioned. 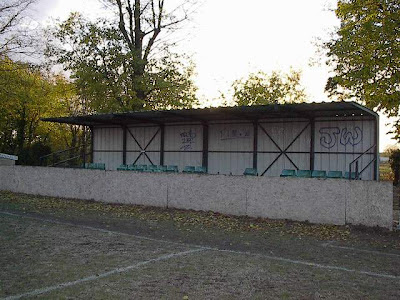 A recent email exchange with Nigel Maitland included him describing Biggleswade Town's 'Fairfield' ground as 'basic'. Now if Nigel deems it basic, with his standards you are in trouble! To be fair though, I can see what he meant but prefer to use the 'dated' description. This is one of those joint facility venues with cricket sharing the site. There is a small seated stand along one side with the river Ivel running behind. The far end of the ground borders the 'Second Meadow' home of Biggleswade United also of the Spartan South Midlands League Premier Division. The opposite end houses two very distinctive buildings. The dressing room complex/cricket pavilion is where you can purchase hot drinks whereas the other building, housing a licensed bar, is more akin to something from a Battle of Britain aerodrome!


As for the match, Biggleswade edged a close but scrappy encounter by the two goals to one. It was a typical end of season affair. Ian Scott who managed teams at Senior level (including Haringey Borough at this venue) informed me that the football in this league is often not in keeping with it's standing in the pyramid system. On the evidence of Saturday he may well have been right, but perhaps part of the problem was the referee, who booked virtually everyone in the ground. I escaped unlike the Royston assistant manager who was banished from the touchline. The visiting centre half received a red card in the last few minutes and I can only assume that his turn had come round again. 0 out of 10 from the Pieman, Ref! 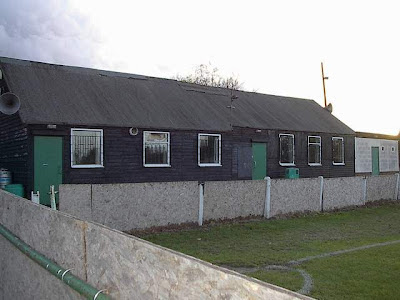 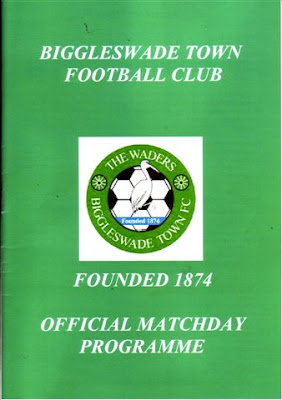