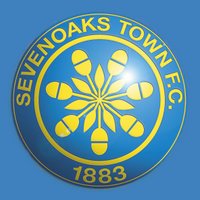 The importance of Sevenoaks grew from the merging of the two main roads from London and Dartford into one main route heading south through the Weald to the coast. It was therefore a suitable venue for a market and this was probably established some time in the mid 13th century.Sevenoaks has remained a market town to this day. A Wednesday evening jaunt to Sevenoaks enabled me to visit my first Kent League ground since 2003.Although there is a much nearer railway station to Greatness Park (Bat and Ball - 5 minutes walk), I opted to use the main Sevenoaks station before and after the match. Faster trains and a greater frequency being the reason. 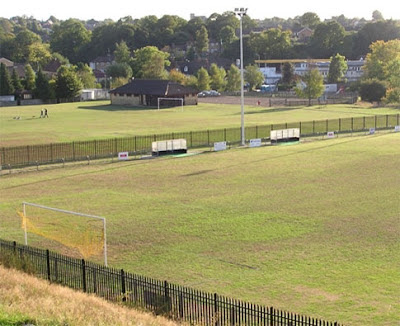 Greatness Park boasts a couple of small seated stands separated by a covered standing area. The refreshment kiosk and changing rooms are located behind one goal. Whereas the clubhouse can be found adjacent to the car park a couple of hundred yards away (still not metric me!) from the turnstiles (no stile and nothing turning but you know what I mean). Sevenoaks sit bottom of the league whereas visitors VCD Athletic occupy sixth place, having also secured the Kent Senior Trophy via a penalty shoot out against Tunbridge Wells. Therefore it was refreshing to see the home side take the game to their visitors, scoring early and adding another midway through the first half. VCD (Vickers Crayford Dartford) were always a threat and got back on level terms with goals either side of the break. This end to end match saw VCD take the lead with a superb free kick and it was they that looked likely winners. The referee had already checked his watch on a number of occasions when Sevenoaks grabbed a last gasp equaliser for a deserved share of the spoils from a very entertaining match.

Take a bow referee Mr I Fissenden, who with a no nonsense approach and excellent time keeping enabled me to catch the 22.02 from Sevenoaks to London Bridge (it was a very brisk walk up and down some less than user friendly slopes!) 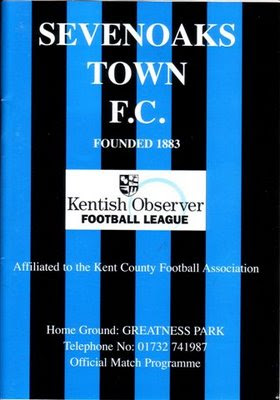