Winchester began as a Roman town. It was built about 70 AD. The Romans called the new town Venta Belgarum which means the capital of the Belgares (who were the local Celtic tribe before the Roman conquest). Roman Winchester was the 5th largest town in Britain and one of the first to receive defences. Archaeology suggests the town reached its peak of population and development in the early 4th century. In 1066 after the battle of Hastings, King Harold's widow stayed in Winchester but when the Normans arrived she surrendered the town and was allowed to leave in peace. In 2006 after a short train journey the Pieman arrived in Winchester!

Winchester is easily accessed by train from London Waterloo and thanks to some excellent advice from Ciderman the Pieman buys his annual season ticket from South West Trains. This results in 6 free tickets per year and this was certainly useful for a family excursion on Saturday. The children travelled for £1 each on Dad's Network Gold Card. We arrived in Winchester mid-morning and our first port of call was the splendid Cathedral. We spent an hour looking around and this time was well spent. When considering how old these places are it is difficult to imagine how our predecessors managed to build such enormous structures with limited resources. It is true though that it was not a quick process and many cathedrals were built over many decades. 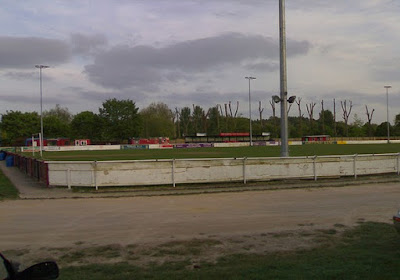 We then adjourned to the Old Gaol House (Wetherspoons) for lunch where I enjoyed a pint of Hampshire Rose from the Itchen Valley Brewery. After lunch our party split with the girls opting for the City Museum and Round Table for their afternoon entertainment (very enjoyable too they reported) whereas Hotspur and I experienced the magic and drama of the FA Cup at nearby Winchester City FC. Winchester City are a club experiencing good times following years in the relative wilderness of Hampshire football. In recent years they have progressed through the Wessex League to the Southern League and also won the FA Vase in 2004. The City ground is reached via a short walk from the City Centre and probably takes little more than 15 minutes. The railway station is equally as close.The City ground boasts a seated covered stand and also a small covered terrace behind one goal. The more vociferous of the home support congregate here and have their own band playing throughout the match. I counted 5 drums and a couple of bugles. The dressing room/clubhouse block appears fairly new and there are a numbers of caravans in club colours situated around the ground serving as the club shop and board room among other things. 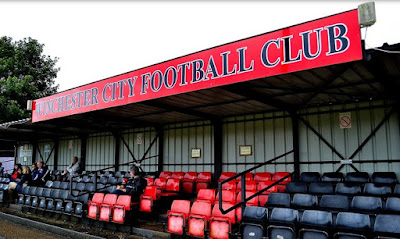 Blustery conditions is an understatement for Saturday afternoon when visitors Chatham Town managed to take a 3 goal lead into the break. The hosts had struggled for most of the half to get near the visitor’s goal, although one splendid chance went begging. At half time I and others speculated as to what was to come. I certainly did not believe the tie was over but felt it important that Winchester scored earlier on. This duly happened but surprisingly Chatham managed against the wing to play some neat attacking football and in doing so countered the Winchester efforts at making further inroads. Eventually though a second goal for the hosts did come and a penalty five minutes from time levelled the tie. With the match over according to the Pieman's timepiece Winchester forced home the winning goal. Cruel luck on Chatham who at the very least deserved a replay but what a super cup tie. 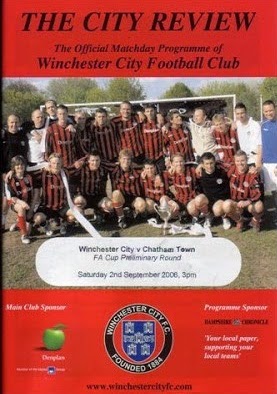