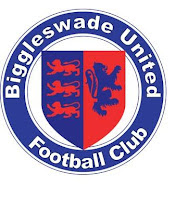 The area around Biggleswade is thought to have been inhabited from around 10,000 BC, with arrowheads dating from this period found in the region. In Roman times, a loop road known as the White Way passed through Biggleswade (possibly along the course of the present-day Drove Road), linking up with the Ermine Way at Godmanchester. In the Fifth century AD, Saxon invaders settled here — the name Biggleswade is thought to be derived from Biceil, an Anglo-Saxon personal name and Waed, the Saxon word for ‘ford’.  In 1132, Henry I granted the manor of Biggleswade to Bishop Alexander – Alexander the Magnificent – of Lincoln to help endow Lincoln Cathedral. The town was granted a charter to hold a market during the reign of King John (1196–1216) – a market is still held in the market place in the centre of the town every Saturday. The church is dedicated to St. Andrew. Biggleswade Castle existed in earlier times, as did a manor at Stratton Park Moated Enclosure. On 16 June 1785 there was a large fire in the town. The fire started at the Crown Inn and spread rapidly through the neighbouring streets. By the time the fire had been brought under control, nearly one-third of the town had been destroyed, including 103 houses leaving 332 people homeless. A national appeal was launched to raise funds for the many people who had lost their homes and their livelihoods. In the local parish church there is a stained glass window depicting the fire.
I was fortunate to be offered a lift to this match. On arrival it soon became clear that there was doubt that the match would reach conclusion due to the plummeting temperature. I love visiting new grounds but the thought that I could have stayed in the warm at home was never far from my mind. Not unusually for this level, the ground is basic with the only covered area for spectators being a smallish structure along one of the sides; mainly standing but boasting a (very) few seats. One of those seats was occupied by the legendary Brian Buck. Brian is very well known on the groundhopping scene having visited more grounds than anyone else I know. Just as remarkable is his record of attending 1000 consecutive Tottenham Hotspur 1st team home matches, a run stretching back to 1969 . Brian lives in the area and he did appear familiar with this particular seat!


The referee deserved enormous credit for the way he enabled this match to reach conclusion. It became clear prior to kick-off that one side of the pitch was freezing but a common sense approach, a shorter half time break and the cooperation of everyone (players and officials) got us through to 90 minutes. This Pieman thanked the officials for their efforts and in response the referee said that both teams had played very well. For the record, Holmer Green took an early lead in this 'Six Pointer' (both clubs are struggling near the foot of the table) only for Biggleswade United to draw level with a penalty and take the lead before the break. Holmer Green levelled shortly after the interval only for Biggleswade United to claim all 3 points by converting another spot kick. An excellent match played in very difficult conditions. 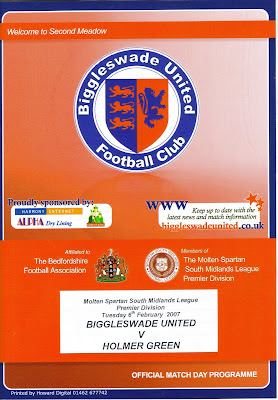