Braga, city and municipality in north western Portugal, is the capital of the district of Braga, the oldest archdiocese and one of the major cities of the country. The region of Braga has been inhabited since pre-historic times, and in the Iron Age the Bracari people occupied the region and built their characteristic fortified villages (castrum). It was the capital of the Callaici Bracarii, or Bracarenses, a tribe who occupied what is now Galicia and northern Portugal. The musical instrument known as the cavaquinho has its roots in Braga. This instrument was once so closely associated with the region that it was called the braguinha ("little Braga"). In Harry Potter, the city is home to Braga Broomfleet, a Quidditch team. Furthermore, Mike Kenny informs me that Braga in Spanish translates as underpants. In September 1984 The Pieman ventured to Braga with Tottenham Hotspur for a 1st Round 1st leg UEFA Cup tie against the same opposition. On that occasion 2 goals from the prolific Bilko and another from the Russian speaking Galvin saw off the Portuguese side without reply. That match was played at Braga's crumbling former ground. Not wishing to oust the effervescent Andy Porter from his statistician's throne, the Pieman wishes to draw attention to similarities between the campaigns of 84/85 and this season. This season Spurs played a Prague team (Slavia) over 2 legs, then it was neighbours Bohemians, this season we met Bruges at the Group Stage, in 84/85 it was the same opposition over 2 legs and of course we now meet SC Braga again. The only other opposition met in 84/85 was the pre Beckham Real Madrid when a fine Bilko strike in the Bernabeau was harshly ruled out, and slipped out of the competition courtesy of the soft goal scored by the Spaniards at White Hart Lane.

Our flight from Gatwick via Lisbon using Portuguese national airline TAP enabled us to reach Porto from where a regular regional train service connects with Braga. Reasonably priced at 2 Euros for a single journey, the duration is between 50 minutes and 1 hour 10 minutes depending on the amount of stops. 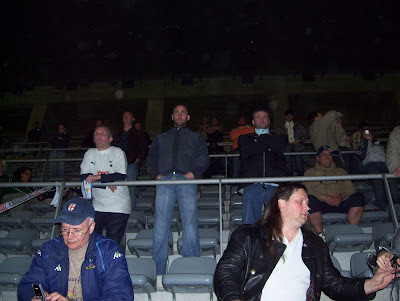 The Guide to Portuguese Breweries was a valuable source of information, if only providing confirmation of the lack of variety available. If you want the bland Super Bock lager then you will be OK in most bars and cafes in Braga. The dark Super Bock Stout (mainly bottled) provides a decent alternative although colour is the only aspect in common with traditional stout. The 6.2% Sagres Bohemia is described in the guide as amber with a fruit and caramel aroma, a sweet taste with boiled sweets and nuts flavour. I liked this beer! On the morning of the match, I walked up to S.C Braga's previous ground (Estadio 1.° de Maio), the scene of that 1984 triumph. The ground is still in use and continues to be the administrative HQ for the club. Although dated in appearance, the stadium still looks in better shape than it did on the occasion of the earlier match when the locals used the crumbling terracing as ammunition!

Sporting Clube De Braga like Rotherham United, Stirling Albion, Didcot Town and Woolwich play in red shirts with white sleeves - a legacy of some misguided Braga resident returning from England with a strange idea, based on his experience in visiting one of the four clubs previously referred to. The Estádio Municipal de Braga (Capacity: 30,200) is a stunning spectacle and to have created the stadium also represents a remarkable feat of engineering. It has one of the most spectacular settings of any stadium in the world, as it was carved out of a quarry (Monte Castro) that overlooks the city of Braga. The enormous earthmoving process contributed heavily to its €83.1 million cost. 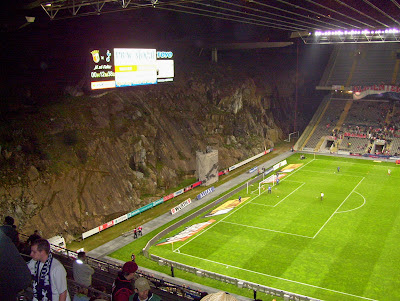 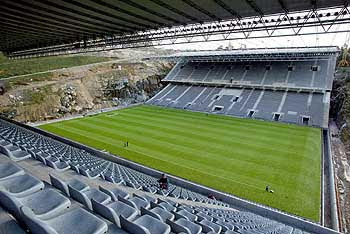 Unlike most major stadiums, Braga Municipal only has stands along the sides of the pitch. Behind the goal at one end are the rock walls of a mountain and at the other is an open view over the city sprawling in the distance. Each stand is covered with a canopy-style roof, and these are connected to each other across the pitch by dozens of steel strings, a design apparently inspired by ancient South American Inca bridges. We, unlike the majority of the visiting supporters approached the ground from above (20 minutes walk from city centre). I can honestly say that I had not anticipated the amazing site of the stadium from above!

As for the match, Spurs maintained their 100% record in this season's competition with a brace from Keane and a goal from Malbranque. 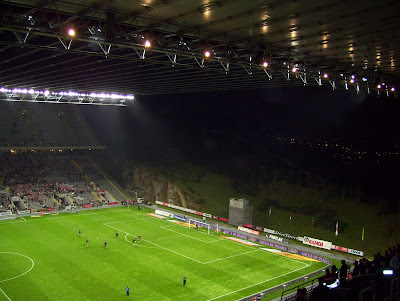 En route to Porto airport the following day, we took the opportunity to visit the stadia of city rivals FC Porto and Boavista. The former is a completely new venue built for Euro 2004 and not the stadium I visited with Spurs in 1991 in the European Cup Winners Cup. A decent lunch of local fish was enjoyed despite a few communication difficulties in a cafe near the Boavista stadium. I resorted to pointing at what appeared a popular choice for the locals and Ciderman and I were not disappointed. 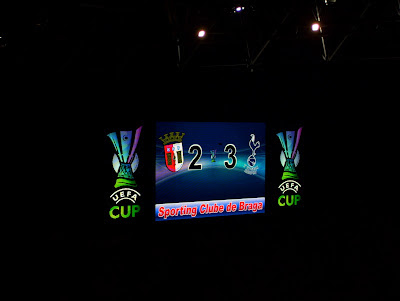 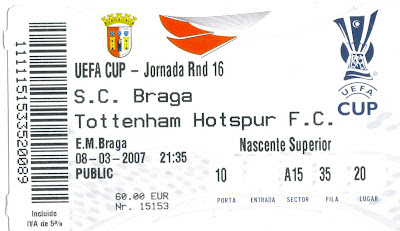 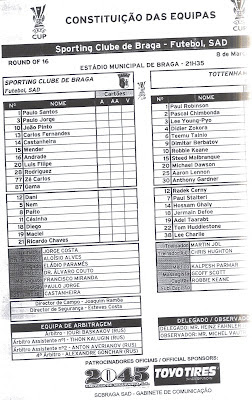