Seville is the artistic, cultural, and financial capital of southern Spain, irrigated by the river Guadalquivir. It is the capital of Andalusia and of the province of Sevilla. The inhabitants of the city are known as Sevillanos. The population of the city of Seville proper was 704,154 as of 2005. According to legend, Seville was founded by Hercules and its origins are linked with the Tartessian civilisation. It was called Hispalis under the Romans and Isbiliya with the Moors.

Our trip to Seville in Easter week came at the same time as the major religious festival. Holy Week is known as 'Semana Santa' in Spain and is most widely celebrated in the towns and cities of Andalucia. In Seville it is one of the city's two biggest annual festivals along with the April Fair (Feria de Abril) which follows two weeks later. Semana Santa takes place the week leading up to the Easter weekend and consists of processions in which enormous 'pasos' (floats) are carried around the streets of Seville by teams of 'costaleros' (bearers) followed by hundreds of 'nazarenos' (penitents). 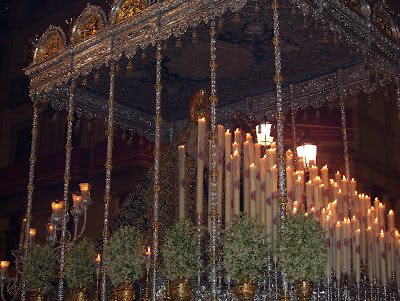 Many of these floats are religious works of art that date back as far as the 17th century, each showing a small part of the Easter story. Throughout the city thousands of people line the streets waiting to catch a glimpse of the processions, each of which takes many hours between leaving its parish and returning there after following a set route around the city. Each of over 50 brotherhoods (cofradías) have two floats so you can imagine the enormity of the occasion.Seville town council had attempted to get the date of the match switched and it is easy to see why in such circumstances. However, they only started muttering after the draw had been made and after many supporters had booked flights and hotels. So for once it is congratulations to UEFA for displaying a bit of backbone!Our hotel was located a couple of hundred yards from the home stadium of Sevilla's rivals, Real Betis. We were able to explore the venue and rather like Sevilla's it is lacking a bit of care and attention. I will not dwell on this aspect other than to say that these stadia would not be allowed to hold Premiership matches. 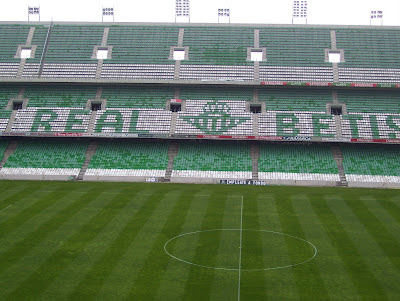 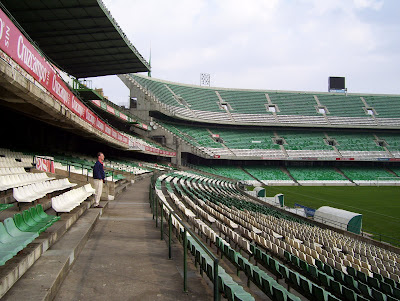 Seville is known for the wide variety of Tapas on offer. Ciderman and I fulfilled our duty to experience a good selection and enjoyed the choices. There is not much that I can comment on regarding beer, Cruzcampo holding the monopoly for the region. 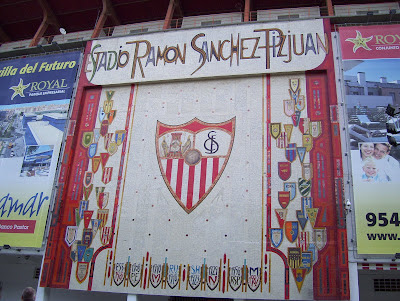 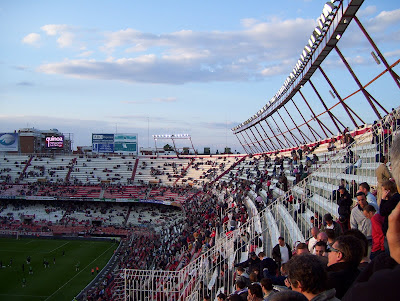 The Estadio Ramón Sánchez Pizjuán, like that at Real Betis, is ageing. However, it does afford a good view of the action but some parts of the seating allocated to visitors will be some distance from the playing area. 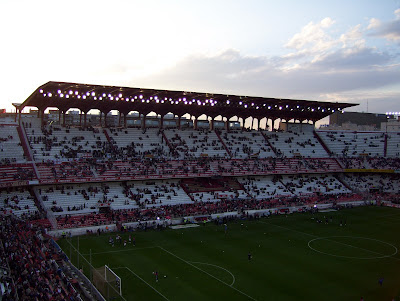 As for the match, this was the first time that Spurs had failed to win in this season's competition. An early Keane goal was wiped out by a harshly awarded Kanoute (remember him) penalty. A second Sevilla goal ensured a win for the home side and the tie is finely balanced prior to Thursday's 2nd leg at White Hart Lane. 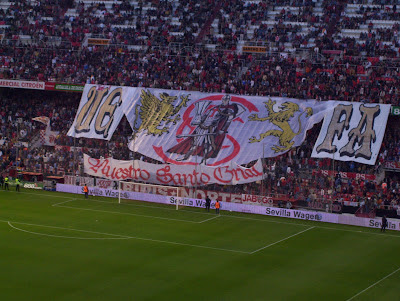 The Seville people are a genuinely friendly bunch who welcomed us to their city at a very busy time. After the match one local bought glasses of sherry type wine over to my good friend Poddy and I. There was a language barrier as Poddy speaks nothing but E17 cockney and I am no better but this was not a problem. 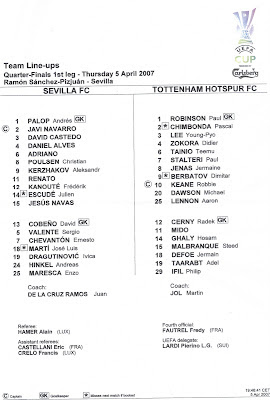