Beaconsfield is a market town in Buckinghamshire, England lying almost 25 miles NW of London. The town sits in the Chiltern Hills Area of Outstanding Natural Beauty and is part of the London commuter belt. The first written reference to Beaconsfield dates from 1185 where it is spelt Bekenesfeld, although this is mistakenly thought to mean the ¨field by the beacon¨ in actual fact is derived from "clearing in the beeches" (beech trees). The town's icon is an oak tree. An annual fair is traditionally held on May 10. Its charter originally allowed for a yearly market for the trading of goods and livestock, but it has now developed into a funfair, erected for one day only on the main roads of the "Old Town". In recent years some residents have opposed the fair as a hindrance to the Old Town, and have called for it to be scrapped even though the fair has been going for over 735 years. 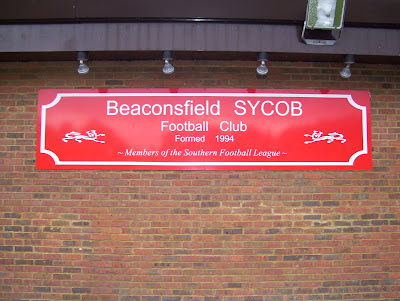 Harry Hotspur and I made the relatively short journey from London Marylebone to Beaconsfield courtesy of Chiltern Railways. The journey time being less than half an hour on the faster services. En route it also presented an opportunity for Hotspur to see Wembley Stadium from the train. 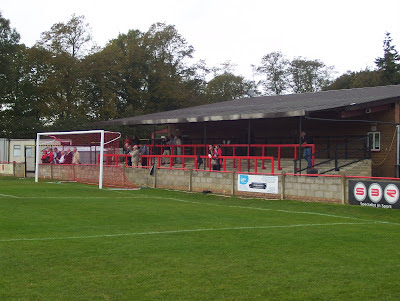 On arrival at Beaconsfield, a 25 minute stroll enabled us to reach Holloways Park. Our journey prior to the match was interrupted by a refreshment break at the Greyhound, one of a number of pubs situated around the town’s prominent and picturesque cross-roads. I opted for a pint of Booby Trap brewed locally at the Rebellion Beer Company at Marlow Bottom. A decent refreshing choice it was too. 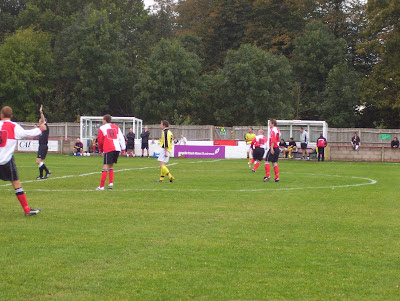 After the crossroads, the route takes you past Beaconsfield Rugby Club to a footbridge over the busy M40. Having negotiated this, a further few hundred yards on, you arrive at Holloways Park.

Beaconsfield SYCOB FC was founded in 1994 following a merger of Beaconsfield United FC and Slough Youth Club Old Boys FC. Beaconsfield SYCOB flirted with Southern League football recently and the standard of this fine ground reflects this. Slough Town FC, without a permanent base at present, are sharing Holloways Park in a three year deal, subject to finding a ground of their own. Clearly this arrangement will be of mutual benefit. 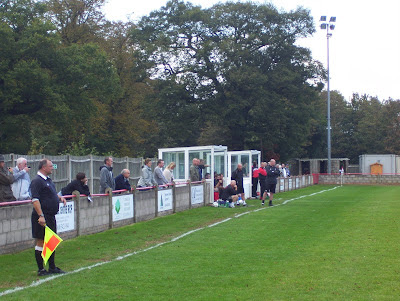 Along one side of the pitch is a covered seated stand, either side of which is a small section of raised terracing. Behind the goal at the clubhouse end is a further section of covered terracing. The opposite end of the ground is open as is the side opposite the stand where the dugouts are located. 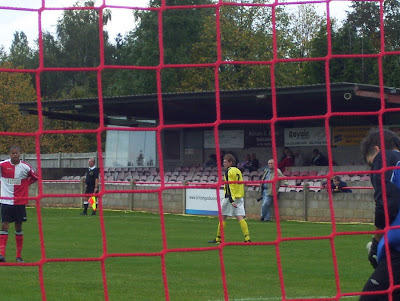 Visitors Langford FC took the lead after 15 minutes through the lively Mark Barnes. Langford retained the lead until midway through the 2nd period when 2 goals in a minute from Dan West and Michael Currie (just as well as he appeared likely to explode with frustration – Ed) turned the game. We enjoyed our visit to Holloways Park, it is just a shame that only 43 others did likewise! 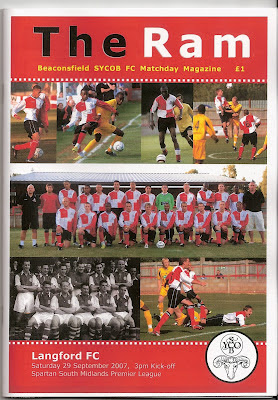