Larnaca is a city on the east coast of Cyprus. The major international airport of Cyprus, Larnaca International Airport is located in this city. In ancient times, Larnaca was known as Kition, or (in Latin) Citium. Larnaca is colloquially known as "Skala" (Greek: Σκάλα) to the Greek Cypriot community and "İskele" to the Turkish Cypriots. It is the island's second commercial port and an important tourist resort. The city of Larnaca is well-known for its picturesque sea-front which includes rows of palm trees. Much of the activity is centred around the city promenade during the major festivals. The most important of these for the city of Larnaca is Kataklysmos or the Festival of the Flood, celebrated in early summer with a series of cultural events. Among the 13 worldwide places that Larnaca is twinned with, is Haringey home borough of Tottenham Hotspur FC. 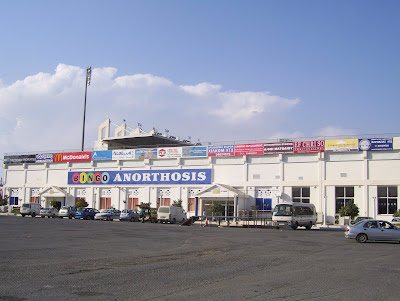 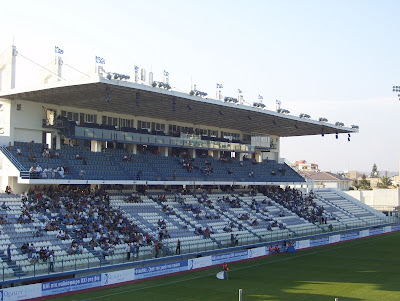 Anorthosis Famagusta FC (Greek: Ανόρθωση Αμμοχώστου = Anorthosi Ammochostou) is a Cypriot football and a volleyball club which comes from Famagusta. It was founded in January 30 1911. After the Turkish invasion of Cyprus in 1974, Anorthosis became a refugee team and is now based at the Antonis Papadopoulos Stadium in Larnaca. The Anorthosis Home Stadium in occupied Famagustahas been abandoned since 1974. 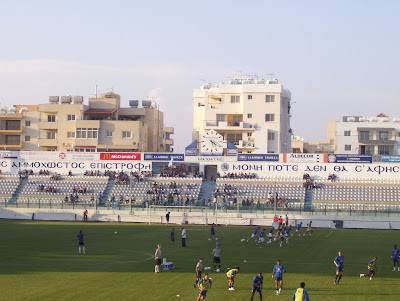 A Wednesday morning flight from Heathrow enabled us to reach Larnaca a full 24 hours before the match. A late successful bid by Channel 5 resulted in the match being brought forward by 3+ hours. Those supporters travelling a day later on the equivalent Cyprus Airways flight will have been grateful that even with a delay they were just able to get to the stadium in time for the match. 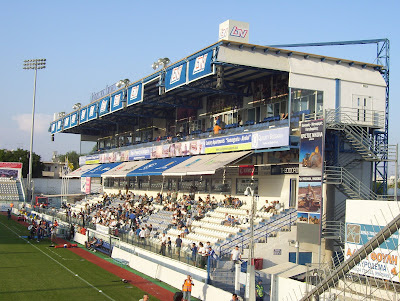 We stayed in central Larnaca and took advantage of the opportunity to explore some of the many watering holes available. To be honest the variety of local beer was limited to the bland Keo and Leon brews. However the exception was to be found at The Brewery (pub/restaurant), where a varying selection of home brew was available. However the quality meant that at this establishment you pay four times the price of the mass-produced brands. 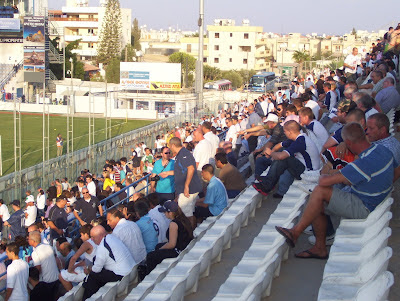 We were fortunate to be given a lift out to the ground but after the match our walk back into town only took half an hour at a leisurely pace. On this basis I would guess that the stadium is around 2 miles from the centre and coast. With Spurs leading 6-1 from the 1st leg, the interest from the Cypriots was diluted. Initially Spurs were allocated less than 500 tickets but on the night this figure swelled significantly. It was clear that holidaymakers were bussed in from other parts of the island (some additional duties for tour reps – Ed). 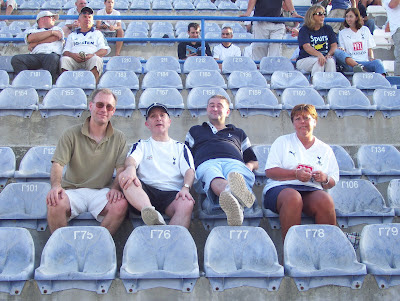 The stadium being relatively new, offers a good view of the proceedings from most angles. There are two covered tiered seated stands along the sides. Behind the goals are uncovered seated stands. Torrential rain, thunder and lightning later in the evening meant that that the visiting support and the home fans in the opposite end were spared a soaking by the early kick off (Thanks Channel 5 – Ed). The match was effectively a non event. Anorthosis Famagusta took the lead in the 2nd half with the benefit of an overlooked blatant handball. Spurs levelled through Robbie Keane. 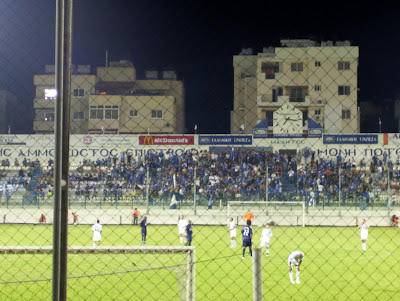 The following afternoon, the pilots of Cyprus Airways staged a lightning strike (More lightning – Ed). Our return flight to Heathrow was delayed by 3 hours. This Pieman is particularly grateful to Good Bobwin’s chauffeur (Steve Martin) for the lift home to Cheshunt. 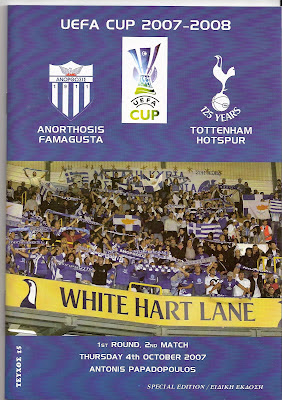