Kentish Town is first recorded during the reign of King John (1208) as kentisston. By 1456 Kentish Town was recognised as a thriving hamlet, and in this period a chapel of ease is recorded as being built for the inhabitants. The early 19th century brought modernisation, causing much of the area's rural charm, the River Fleet and the 18th century buildings to vanish, although pockets still remain, for example Little Green Street. Between the availability of public transport to it from London, and its urbanisation, it was a popular resort. Large amounts of land were purchased to build the railway, which can still be seen today. Kentish Town was a prime site for development as the Kentish Town Road was a major route from London northwards. Probably it's most famous early resident was Karl Marx who lived at 9 Grafton Terrace from 1856. 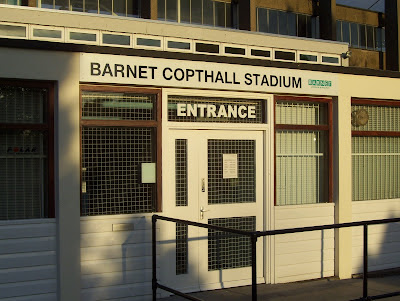 After an initial nomadic existence, Kentish Town FC is now settled at Barnet Copthall Stadium. This venue was recently visited by Martin Wray, web editor of Football Grounds in Focus (check out this excellent site – Ed). Martin details additional information concerning the history of the stadium. However, I can add to this with the revelation that in the 1980s, the stadium was the venue for Tony Wade’s wedding reception. 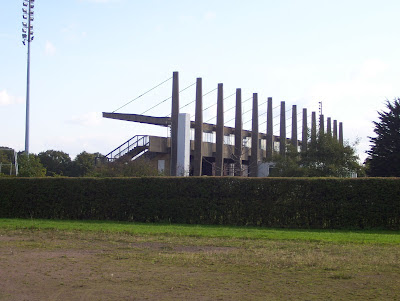 I understand that the Wade reception did not receive coverage in the national press, so readers of this report can be forgiven for not recognising the name or event. More importantly the match I attended on that occasion was not of the football variety. Therefore Harry Hotspur and I set off to redress the imbalance. We travelled via Tottenham Hale and Euston to reach Mill Hill East from where we caught a 221 bus the short distance to the stadium. 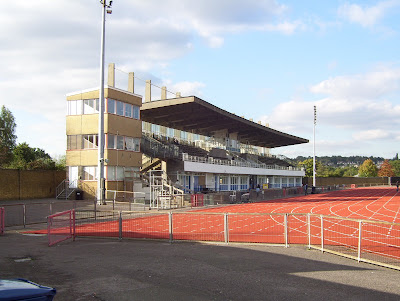 For an Athletics venue this is certainly one of the best for viewing football, with very little by way of restrictions as to where you can watch the match. The seated stand provides an excellent vantage point, whereas there is raised terracing surrounding the remainder of the ground. There is some additional uncovered seating opposite the main stand although I ‘m not sure how often this would be pressed into action for Spartan South Midlands football! 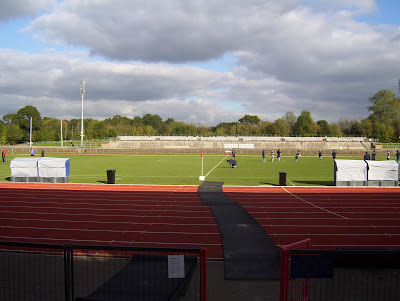 The match was very good and certainly a good advert for this level. Both teams contributed by playing constructive football. Kentish Town took the lead after 20 minutes when Jonathan Donoghue stroked home after holding off a challenge. This was supplemented 10 minutes later when Lee Scott added to the opener with a controlled finish when one on one with the keeper. 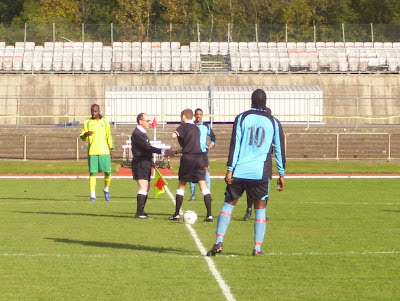 However, visitors Haringey Borough were determined to make a game of it and almost immediately after the break Mark Maher’s free kick was too hot for Town’s keeper to handle – game on! From this point Borough were in the ascendancy and most of the play took place in Town’s half. However, the storm was weathered and Donoghue was able to grab his second goal to give Town some breathing space with another good finish. Not for long though as Borough had soon reduced the arrears with their second, as Adeniyi Adedeji headed home as the ball rebounded off a post following another free kick. Almost immediately there was that man Donoghue again to complete his hat trick (his partnership with Scott looks promising – Ed).

There was still time for the visitors to set up a dramatic finale when they were awarded a penalty but Kieran Donnelly's fierce penalty kick smashed against the underside of the bar and bounced down almost onto the line and the home keeper somehow got up to tip Chima Obiji's virtually point blank header over the bar. 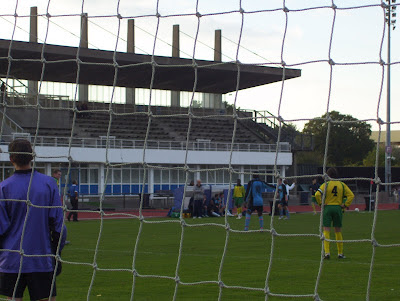 At half time I met Cliff Rhodes, Public Relations Supremo of Kentish Town FC. Cliff explained a bit about the efforts that the club is making within the community and also gave me some back issues of the match programme. Thanks Cliff – hope you received the pictures. After the match, Hotspur and I again took advantage of the 221 bus service. However, on this occasion we travelled as far as Wood Green where we caught a W3 service (passing Haringey Borough’s ground – Ed) to White Hart Lane from where we caught our train home to Cheshunt. 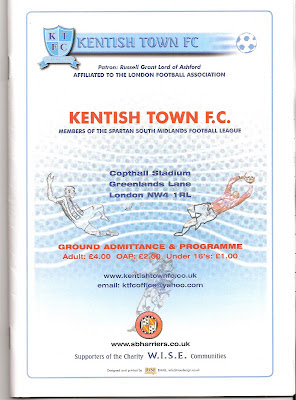 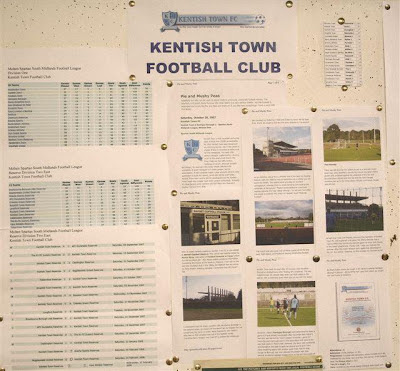