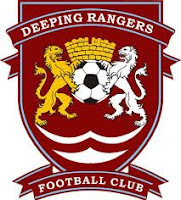 The Deepings is the collective name given to the towns of Market Deeping and Deeping St James and the two outlying villages of West Deeping and Deeping Gate all bordering the banks of the River Welland as it meanders between Lincolnshire and Cambridgeshire. The area known as The Deepings has a long history of habitation going back to prehistoric times. The land is low lying and in the distant past it was frequently covered by the sea as waters rose and receded with each ice age. Through this land flows the River Welland which in ancient times was a tributary of the Rhine when Britain was physically joined to the continent of Europe. It is a land upon which roamed such animals as the mammoth elephant and woolly rhinoceros. From time to time modern day gravel diggings reveal the remains of these wondrous creatures and farmers, with their deep ploughs still to this day, uncover huge logs of bog oak, birch, pine and yew. These finds of buried logs have been so numerous in the past that some farmers in the late 19th century reputedly used the ancient timbers to erect fences. It is sad to say that all the surrounding forests have long ago been cleared and the lakes drained to be replaced by a flat monotonous prairie land, dissected by straight drain channels and punctuated by the occasional tree. Only where the gravel diggings have been worked out and nature allowed to run riot have lakes returned and woods grown to give an insight of lost habitat. This trip was combined with a visit to Peterborough. A family room at the Express by Holiday Inn was secured for £39 for the Friday night and this included a decent complimentary breakfast. With the bulk of the travelling already out of the way we were able to have a look around Peterborough and a good choice this proved to be. We were able to enjoy a tour of the Peterborough Museum, which lasted an hour and a half. I enjoy visiting local museums and can honestly say that this place is up there with the best of them. Our tour guide, Stuart Orme, was extremely knowledgeable and was able to add valuable commentary to what would always be a decent place to visit. The collections on display are in extremely good condition. We did not encounter any of the resident ghosts on our visit. We also took the opportunity to have a look around the centrally located cathedral before heading north on the A15 into Lincolnshire (only just, as Market Deeping is on the southern tip of the county – Ed). I would think that by public transport the easiest option would be by bus from Peterborough but on this occasion we were travelling by car and what may be an awkward journey was made very simple. The Outgang Road home of Deeping Rangers is on the northern edge of town but very easy to find, particularly if using the map and directions contained on the club website. The ground is part of the Deeping Sports & Social Club, which caters for Cricket and Tennis in addition to the ‘beautiful game’. The football ground is fully enclosed with conifers surrounding three sides of the playing area. On the other side is the impressive stand with adjacent covered standing area for refuge from inclement weather. Deeping Rangers are the current champions of the United Counties League and are rightly proud of this achievement. Visitors Cogenhoe United (pronounced cook-no), by contrast were bottom of the table going into this match, without a single point from their opening four matches. Therefore it was no surprise when after 15 minutes; David Cobb put Deeping ahead with a fine strike. However this was countered 12 minutes later by a superb goal from Rob Foster. It was Foster again who poked home 3 minutes before the break to put the visitors ahead. There was still time for one more twist before the Pieman retreated for his cuppa, when with the last kick of the half, Michael Stevenson hit home a penalty to level for the home side. Harry Hotspur had an enjoyable afternoon retrieving the ball behind the goal. Good exercise too! The second half continued with Deeping having chances to regain the lead but the collective work rate of the visitors was always likely to cause problems. On the evidence of this match they are a far better team than the league table suggested. The icing on the cake for them was a stunning free kick from the impressive Foster, which gave him his hat trick and Cogenhoe the 3 points.

All in all Outgang Road is a nice place to watch football. I popped into the clubhouse briefly after the match and real ale buffs will be interested to note that I spied a couple of handpumps - always a welcome sight.