Formerly known as Slepe, in the old county of Huntingdonshire, this ancient riverside market town is now named after the Persian Bishop, St. Ivo. St. Ives, now within Cambridgeshire, stands on the River Great Ouse and is world famous for the Chapel on the Bridge. For over 1,000 years the wide centre of St. Ives, now known as Market Hill, has hosted some of the largest public markets in England. Many years ago these markets included livestock and for a time was one of the biggest of its kind. Today the Monday Markets still fill the town centre. On every Bank Holiday Monday however the market swells to fill almost the entire town with traders coming from all over the country to sell their wares to the thousands of people who attend under the watchful eye of Oliver Cromwell, one time resident of the town, whose statue stands in the centre of the Market Place. 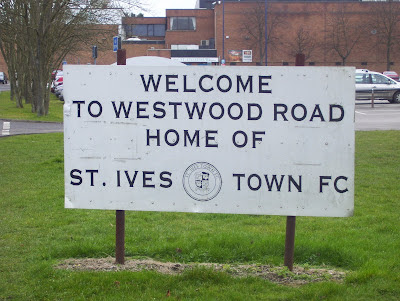 Although this Pieman was looking forward to his visit to Wembley for the League Cup Final, there was an equal level of anticipation ahead of this trip to Cambridgeshire. we travelled by car to this match which is easier as St. Ives is not connected to the railway. 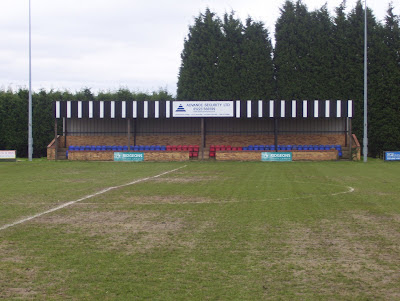 En route we called in at the Wood Green Animal Shelter before making the short onward journey to St Ives. We took advantage of the excellent menu at The Robin Hood in Market Hill – two main courses for £9.00. We opted for the superb Thai Red Curry whereas the children enjoyed their huge plates of lasagne. 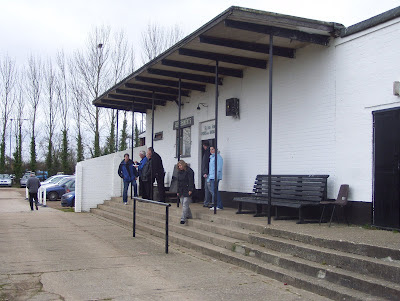 Westwood Road is only a few minutes walk from the centre of town and is situated next to the St Ivo Leisure Centre where plenty of parking facilities are available. Football parking is also available inside the ground. On arrival, Harry Hotspur and I were greeted by Phil and Emily Butler, fellow groundhoppers, who had travelled the short distance from Ely. 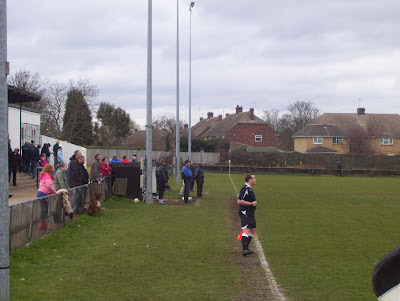 Dean McLean (Football Grounds in Focus) described Westwood Road as unspectacular, not too good, but not too bad either – I agree with this. As for when Dean visited, the majority of the home support gathered on the raised terracing in front of the social club; the smart stand opposite being occupied by very few. There was certainly a good atmosphere on Saturday and both sets of fans and officials that we spoke to were very friendly. 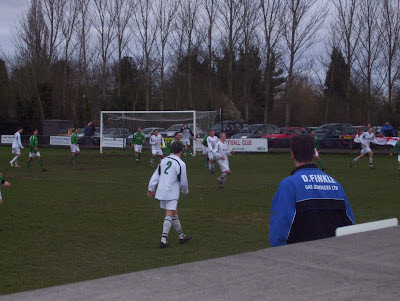 The match itself provided excellent entertainment. Visitors Sleaford Town were good value for their win. Dominating the early period, they led at the break 2-0 courtesy of strikes by Jamie Shaw and Tom Siddons. Shortly after the interval Shaw bagged his second but midway through the half the home side struck twice through Barry Albone and Dan Pilsworth. The second of these strikes followed a penalty, awarded harshly for handball, reducing Sleaford to ten men as Oliver Sidney was sent off. At this point it seemed that the home side would salvage something from the match but two late strikes from Jason Sedlan ensured the three points for the visitors. 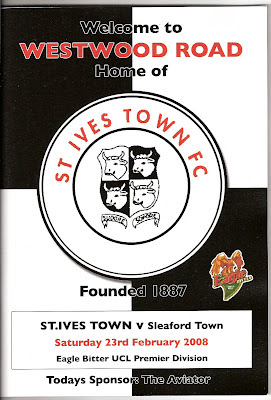