Tongham is a small Surrey village located close to the north-east Hampshire and Surrey border. The village lies in a triangle between the A31 and the A331. Tongham is home to the Hogs Back Brewery as the village lies just north of the Hog's Back. Archaeological evidence suggests man has occupied the area of Tongham since Neolithic times. In August 1940 a number of munitions trucks were bombed by the Luftwaffe. 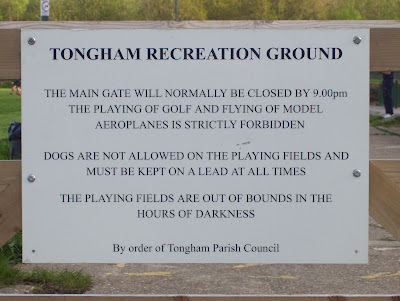 Accompanied by the enigmatic Nigel Maitland, I travelled from London Waterloo to Ash Vale. Here we were met by Nic Adamou and his trusted sat nav for onward transportation to Tongham. 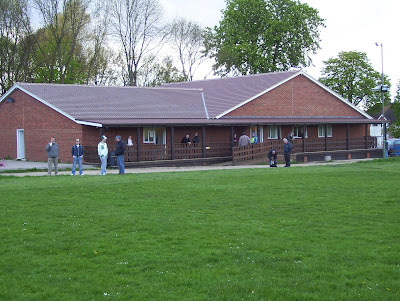 The Tongham Recreation Ground is one of the more basic venues hosting senior football. The complex serves both winter and summer sports. In fact the cricket square was being prepared for the new season on this particular evening. 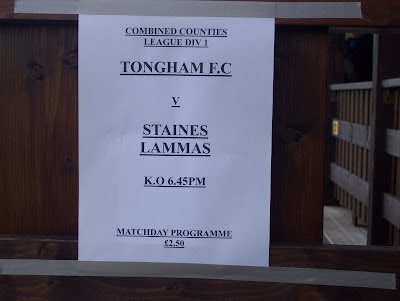 The relatively new block housing the changing facilities also boasts a licensed bar, which is presumably for community use and was open during the match. Refreshments for spectators were served from a separate area within the block. It was from this area that match programmes were sold. 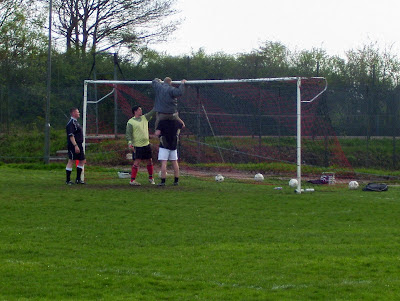 As reported in the previous post, visitors Staines Lammas FC are in a good position to win the championship. Having won at Knaphill they also secured maximum points in their next match. Avoiding defeat in this particular fixture would probably be enough to secure the title. I say 'probably' because this is all subject to the situation surrounding Neasden Foundation FC, currently suspended by the Combined Counties League. 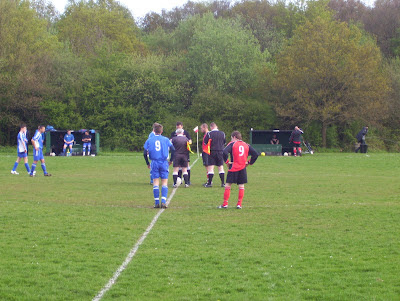 On Bank Holiday Monday, Lammas will contest the Division One Cup Final against title rivals Hanworth Villa at Ashford Town FC. For this reason, it is likely that Lammas will have rested a few players for this match 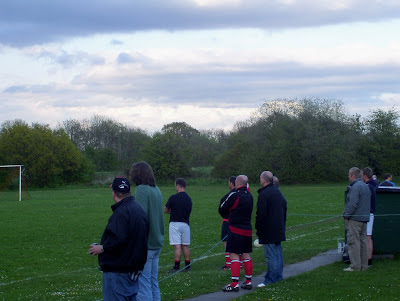 Midway through the first period Lammas took the lead and shortly afterwards added to this via a penalty. This appeared to be harshly awarded and the Tongham defender received a yellow card for the offence. Unfortunately in voicing his concerns he received a second yellow card immediately and accordingly his participation in the match was over. 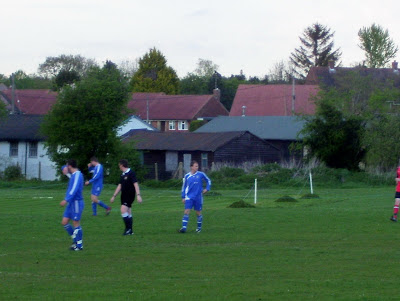 Another goal early in the second half, missed by renowned photographer Eric Marsh (still enjoying his half time cuppa - Ed) and a fourth with about ten minutes to go sealed the points for the champions elect. A lift to Woking, passing Knaphill FC, enabled us to catch a fast service back to London - thanks Nic. 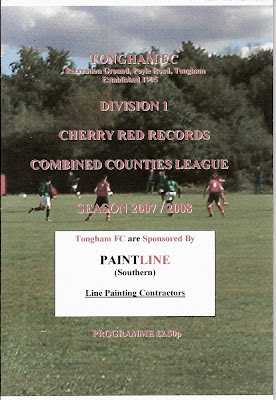