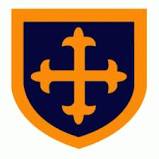 Guiseley is a small town in the City of Leeds metropolitan borough in West Yorkshire. Its name is of Saxon origin. It was named "Gisele" in the Doomsday Book. Much of the surrounding valley was once wooded, and "ley" means a clearing in the woodland. The town is famous for Harry Ramsden, whose fish and chip shop traded from a small shed next to the tram stop. In 1930 he opened his first fish restaurant which was, for many years, "the world's biggest fish and chip shop". Harry Corbett, famous for his children's television glove puppet character Sooty, lived with his parents on Springfield Road. The town was the home of Silver Cross, a pram manufacturer. The factory was operational from 1936 to 2002. 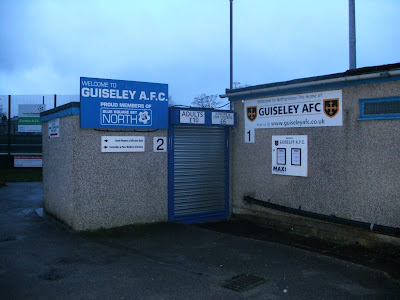 Guiseley AFC was founded in 1909 by a local group of enthusiasts; the club’s first success came in 1913 when they won the local Wharfedale League. Following the end of the First World War the club switched to the Leeds League, achieving little until 1924 when another switch, to the West Riding County Amateur Football League, eventually brought success. A treble of league championships followed in the 1930s as well as two appearances in the last 16 of the old FA Amateur Cup. 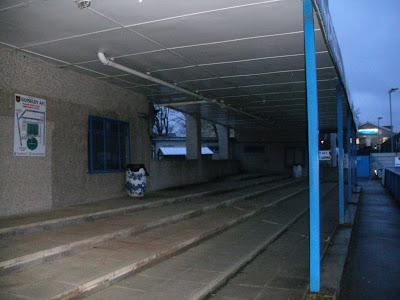 At the time of my visit, the club was enjoying a successful season in Conference North. Lying in second place thirteen points behind leaders Chester with three games in hand. I was staying in Bradford and took advantage of the regular train service from Bradford Forster Square to Guiseley. To reach Nethermoor Park from the railway station, the simple directions on the club website are a perfect aide. On alighting from train exit into station car park and walk diagonally across it towards the path between hedges that leads to a terrace of stone built houses. Walk to the end of the terrace and turn right into Otley Road. Continue on for 200 yards and Nethermoor is on the right. 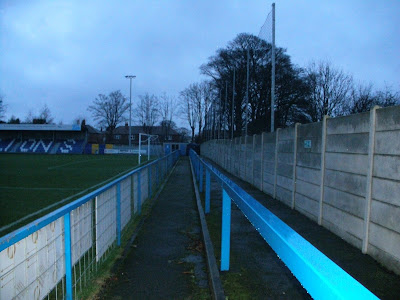 I decided to reach the ground as early as possible in an attempt to take some photographs and I was delighted to be allowed to enter the ground just after 4pm. Not only that, I was also able to enjoy some early hospitality in the form of a very welcome mug of tea! The Harry Ramsden presence in Guiseley has now been taken over and trades as the Wetherby Whaler. This establishment also has a sponsorship arrangement with the football club. The restaurant is only a couple of minutes walk from the ground and this Pieman was ‘hooked’ on the opportunity! His meal of haddock, chips and bread & butter was washed down with a pot of tea. I took a stroll around Guiseley before returning to the ground. During this time I enjoyed a refreshing pint of Dana (3.8%) from the Itchen Valley Brewery at the White Cross Public House. 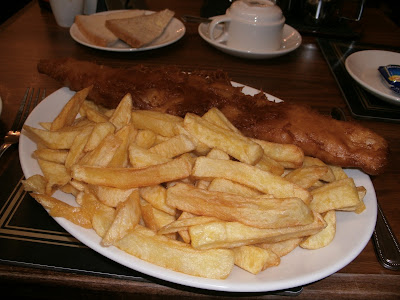 Nethermoor Park is a well appointed venue. Along one side are two covered seated stands. On the opposite side are a couple of covered standing areas. This side also houses the changing rooms and clubhouse (at least three real ales available). This facility is shared with the adjacent cricket club. Refreshment facilities for spectators are also available on both sides of the pitch. Both ends of the ground are uncovered with one having shallow terracing. There are working turnstiles in three corners of the ground. 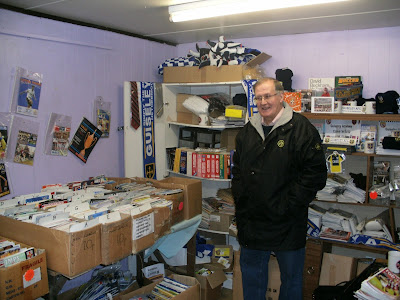 Visitors Corby Town clearly had not read the script and were ahead at half time through a well executed goal. I was informed that Guiseley were not at their best but the home side still managed to take the three points with a couple of goals during their best spell of pressure in the match. Guiseley is a really nice club and I was impressed with the friendly nature of the place. In particular Susan (she made that earlier cup of tea!) and the chap in the club shop with the Walthamstow connections. 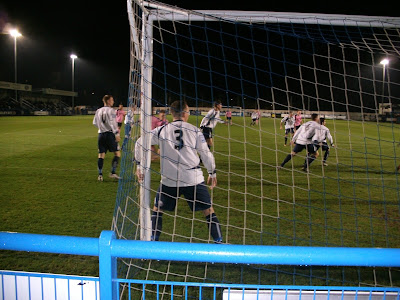 The 21:54 service to Bradford meant I was back in my hotel around 22:15 happy in the knowledge that I had seen a good match. The good folk of Bradford seemed in high spirits too. However, with City having beaten Aston Villa 3-1 in the 1st leg of the League Cup semi-final, I can understand this. 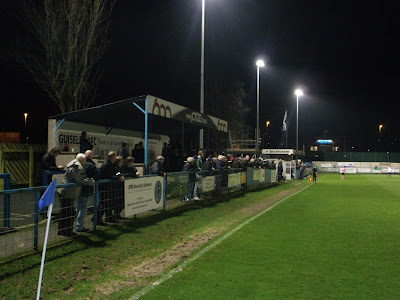 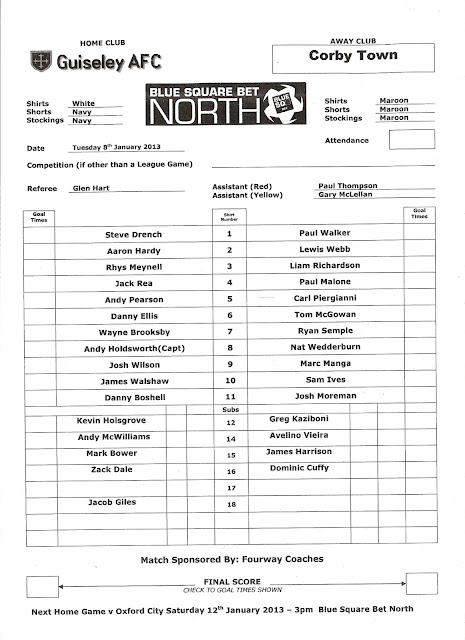 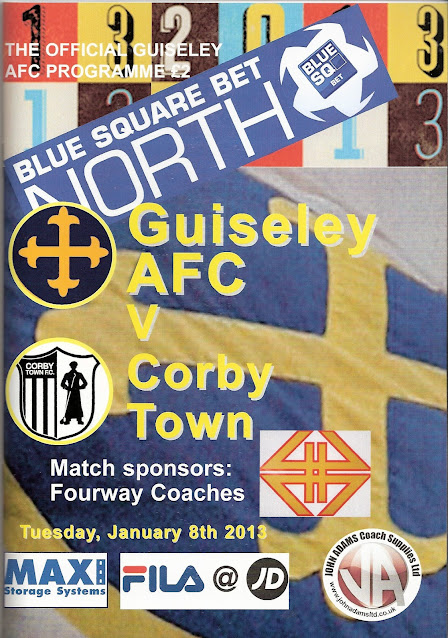