In 1995 the players and officials of Sunday league side Maccabi Association London (MAL) decided to join the Hertfordshire Senior County League. The Club was renamed MALEX  and made its debut in the 1995–96 season. They remained an all-Jewish team, the squad in the first four years based on MAL players who were generally playing in the Hendon and District Sunday League and the Maccabi Southern Football League. During the 1999 close season, the club revised its management structure and decided to change its name to London Maccabi Lions, whilst retaining its all-Jewish status. 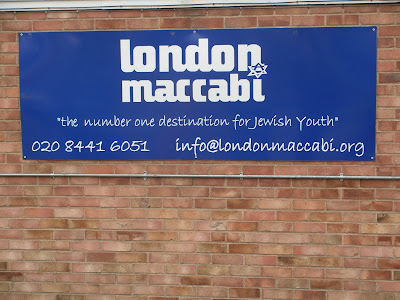 In the 2009–10 season the team under the stewardship of Tony Gold and Steve Grenfell won the Herts Senior County League premier division, winning promotion to the Spartan South Midlands League Division One. This promotion was made possible too because the Lions moved from their home of Rowley Lane in Arkley to ground share with St Albans at Clarence Park, as this ground had flood lights and a 100 seater stand to meet the league requirements. In the 2010–11 season the club moved to Goffs Lane to share with Broxbourne Borough V&E. With Broxbourne folding London Lions returned to Rowley Lane as their home ground though playing midweek fixtures and FA Cup matches at Hemel Hempstead FC. On August 11, 2012 London Lions became the first Jewish team to win a competitive match in the FA Cup.

The Rowley Lane ground is situated in Arkley, Hertfordshire and is only a few hundred yards from the A1. I was fortunate to be offered a lift to this match but I would imagine it is relatively easy to catch a bus from either Barnet or Borehamwood to reach this venue. There is a clubhouse at the ground with a licensed bar (no real ale) also selling hot drinks. A nice touch was that complimentary bourbon and custard cream biscuits were provided at half time to accompany the tea! 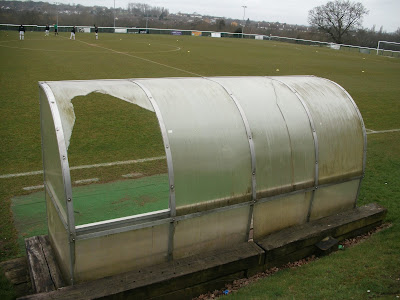 This Pieman had already seen London Lions win in the FA Vase at St Margaretsbury this season. On that occasion they were worthy winners against a team from the division above. At the time of this match they were top of Division One of the Spartan South Midlands League and with games in hand over nearest contenders Hoddesdon Town, were looking a good bet for winning the division. 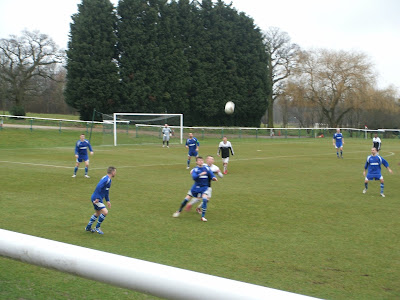 After a pleasant morning, at precisely 3pm the weather decided to become damp, so damp in fact that it soon began to affect the playing surface. This Pieman’s immediate concern however was to find shelter from the rain and sadly the limited space in the grandstand was already accounted for. Surprisingly there was some unexpected cover behind one of the goals in the form of some tall conifers. These acted as protection from the driving rain and made watching the match comfortable. 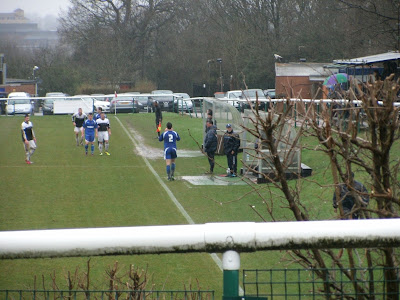 The playing surface continued to worsen as the afternoon progressed but credit to both sides who, despite puddles appearing, continued to pass the ball and made a decent game of it. Amersham Town FC has been struggling this season but you would not have thought they were at the wrong end of the table on this showing. They scored first and will probably take heart from their efforts in this match. On this occasion London Lions did not ‘roar’ to victory, but did enough to secure two goals and maintain their charge to the Division One title. 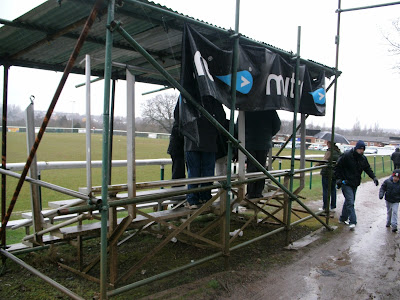 I think it is fair to say that this is a quirky venue for senior football. Clearly the club is making good progress and are ambitious. Spurs fans may remember Steve Grenfell who is now assistant manager at London Lions. It will be interesting to watch their progress although planning permission for floodlights will be at the top of their wish list. The people at this club are friendly and it is worth a visit if you are curious – I can also recommend those custard creams! 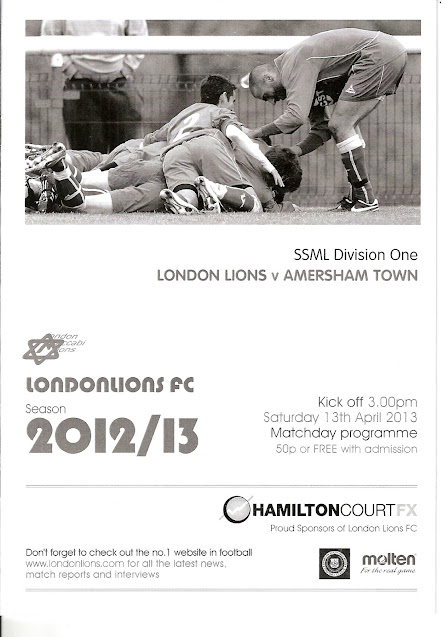