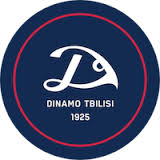 Tbilisi is the capital and the largest city of Georgia, lying on the banks of the Kura River with a population of roughly 1.5 million inhabitants. Founded in the 5th century by the monarch of Georgia's ancient precursor Kingdom of Iberia, Tbilisi has served, with various intervals, as Georgia's capital for more than a thousand years. Under the Russian rule, the city was the seat of the Tsar's viceroy and has served, from 1801 to 1917, as the Imperial capital of the entire Caucasus, including Georgia's current neighbours. Located on the south-eastern edge of Europe, Tbilisi's proximity to lucrative east-west trade routes often made the city a point of contention between various rival empires throughout history and the city's location to this day ensures its position as an important transit route for global energy and trade projects. Tbilisi's varied history is reflected in its architecture, which is a mix of medieval, classical, and Soviet structures. Since the break-up of the Soviet Union, Tbilisi has experienced periods of significant instability and turmoil. 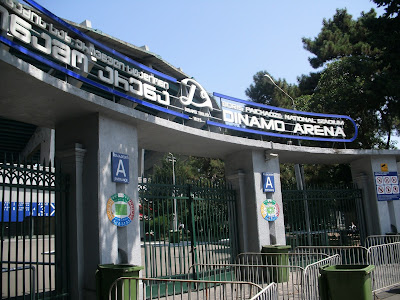 After a brief civil war, which the city endured for two weeks from December 1991 to January 1992 (when pro-Gamsakhurdia and opposition forces clashed with each other), Tbilisi became the scene of frequent armed confrontations between various mafia clans and illegal business entrepreneurs. Even during the Shevardnadze Era (1993–2003), crime and corruption became rampant at most levels of society. Many segments of society became impoverished because of unemployment caused by the crumbling economy. The citizens of Tbilisi started to become increasingly disillusioned with the existing quality of life in the city (and in the nation in general). Mass protests took place in November 2003 after falsified parliamentary elections forced more than 100,000 people into the streets and concluded with the Rose Revolution. Since 2003, Tbilisi has experienced considerably more stability with decreasing crime rates, an improved economy and a real estate boom. 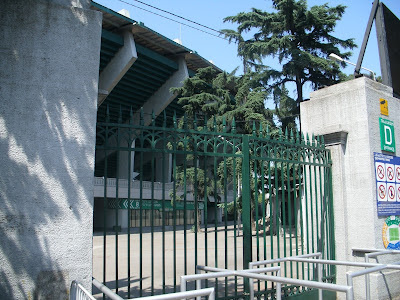 Of all the destinations possible from the pool that Tottenham's opposition would be drawn from, this was the worst in terms of logistics. Short notice from when the draw was made, holiday season and no direct flights from London, meant this would be a challenging trip. That last minute winning goal for Wigan Athletic in the FA Cup Final was certainly having an effect - without that, Tottenham Hotspur's 5th place last season will have meant starting at the Group Stage.

Istanbul, Munich, Warsaw, Kiev and Baku are options of where you can fly to Tbilisi from. This Pieman opted for Warsaw and was presented with an eight hour connection there. Despite the rain, it was good to be able to head for the centre of Warsaw. Here I enjoyed a dish of Polish potato dumplings, washed down with some fine beer.

Having arrived in Tbilisi at 4:00am the following day, an opportunity was taken to catch up with some much needed sleep. Once refreshed, an early opportunity to visit the Dinamo Arena ( Boris Paichadiz Erovnuli Stadion). Match programmes were on sale at the ticket office and I was able to get some photographs of the exterior of the ground. Tbilisi is a mixture of old and new, poverty and affluence. Wandering around town you can experience both extremes within minutes. 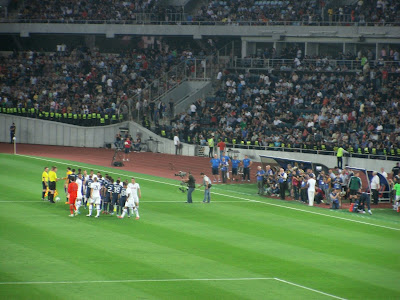 The local brews (lager) are pleasant but for the more adventurous palate, the selection of draft beers available at Brewery "Mirzaani" will take some beating. This Pieman enjoyed Smoked Beer (more than a hint of kippers as agreed with Leigh Rudrum), Barley Beer, Wheat Beer and Black Beer at one of the establishments (restaurant and bar) run by this company. 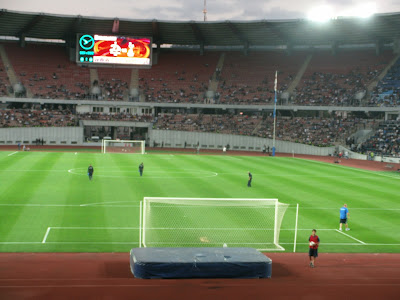 The Dinamo Arena is your regular European style venue with an athletics track. The view from all areas is good (I tested this by walking around the stadium with ease - Ed) and if bunking into the press area to get a team sheet, peaches are available as refreshment! Tottenham Hotspur completely outplayed their Georgian hosts, winning by five goals to nil. A tiring but interesting trip was concluded by flight back to Heathrow via Munich. The in-flight refreshments offered by Lufthansa were considerably more substantial than those offered by LOT on the outward legs. 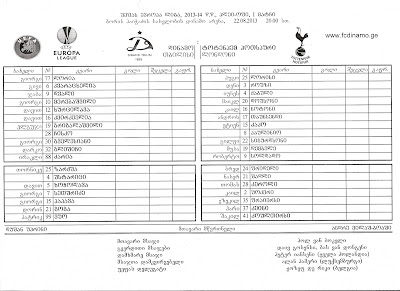 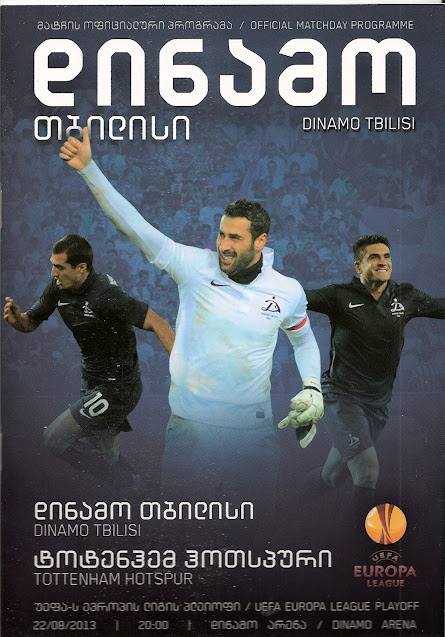